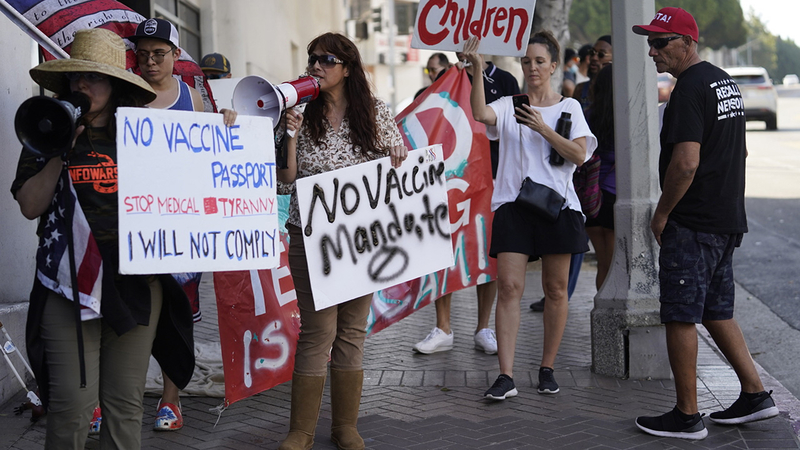 NEW YORK -- With COVID-19 vaccine mandates proliferating across the country in the public and private sectors as well as some school districts, the pushback from those unwilling or hesitant to get their shots is heating up.

The vaccination effort has raised new questions about exemptions because mandates for adults are generally rare outside of settings like healthcare facilities and the military, and the inoculations are relatively new.

While there is no overall data yet on exemptions for COVID-19 vaccines, a number of companies and state governments have seen interest in religious exemptions -- a protection stemming from the Civil Rights Act of 1964.

This leaves employers in the difficult and legally precarious position of determining whether the requests are valid. As such, some states have tried to do away with non-medical exemptions overall for their employees.

In school settings, where vaccines have long been recognized as crucial to preventing communicable diseases, state-level mandates are common and have been tested in the courts.

"One of the most important public health practices we have to alleviate outbreaks and things like measles and whooping cough are vaccines required for school or for daycare entry," Dr. Joshua Williams, an assistant professor of pediatrics at the University of Colorado School of Medicine, told ABC News. 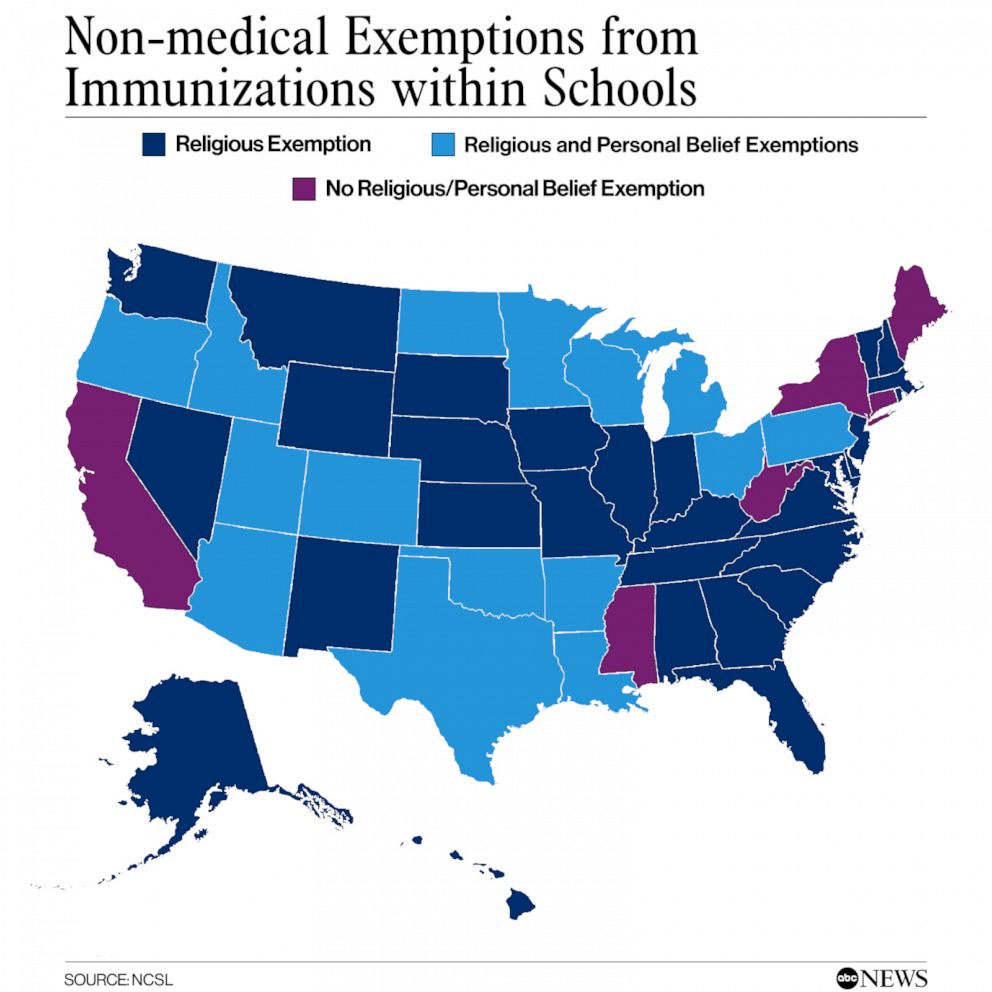 Non-medical exemptions from immunizations within schools

In addition to California announcing that it is adopting a state-wide mandate, individual education boards in cities like Los Angeles have started adding the Pfizer vaccine, which was granted full FDA approval in September and is currently the only vaccine approved for children older than 12, to their list of immunization requirements.

Experts say other school districts are likely to follow suit and have strong legal ground to enforce the requirement set forth in the 1944 Supreme Court case Prince v. Massachusetts.

Here's what to know about the debate over non-medical exemptions:

On the rise in schools

In Idaho, for instance, in the 2019-'20 school year, 7.2% of kindergarteners had non-medical exemptions, according to the CDC data. That contrasts with around 1% for states like Massachusetts, Louisiana and Alabama.

Ellen Wright Clayton, a professor of pediatrics, law and health policy at the Vanderbilt University Law School, believes that schools should take a stand against religious exemptions in the interest of protecting public health.

"The fact of the matter is, parents are not entitled, for any reason, to expose other people's children or other people to [COVID-19] for religious reasons," Clayton said.

California will soon require all students in both public and private schools to get the COVID-19 vaccine once the shot is fully authorized by the FDA.

Schools from all 50 states have historically required immunization starting in kindergarten level to curb the spread of contagious diseases such as measles.

Williams, from the University of Colorado, noted that despite a decrease in religiosity among Americans, there has been an increase in religious exemption requests for vaccination, implying that these exemptions are "no longer serving their original purpose."

It has increased even as some religious leaders, including Pope Francis and Rabbi Chaim Kanievsky, a leading authority in Israel's ultra-Orthodox Jewish community, have made clear that vaccines are necessary for the common good and take precedence over religious beliefs.

This suggests that "perhaps people were increasingly using that religious exemption category, even though they might not necessarily have a religious objection to vaccines," Williams said.

"One thing that people have done previously has shown that the harder it is to obtain an exemption, the lower the rate of exemptions becomes," he added.

Unlike personal belief exemptions, which are relatively broad, religious exemptions have to be integrated into a holistic belief system, said Dorit Reiss, a professor of law at UC Hastings College of the Law.

"You can't just grab onto a biblical verse when it's convenient," Reiss, who has written about the legality of vaccine mandates in law journals, said.

How the exemptions work

Individuals' rights to claim a religious exemption from immunization is protected under Title VII of the Civil Rights Act of 1964. However, as seen in some states, this right can be overruled in the interest of public health.

In the wake of the 2019 measles outbreak in the states of New York and Washington, where most cases were reported among the unvaccinated, the states eliminated religious exemptions.

In the face of a religious exemption application, employers or schools have the right to probe the exemption and question the applicant. In other words, it is on them to assess the sincerity of the belief, not the accuracy or validity.

Employers can require their employees to explain the basis of their belief in detail and don't need to accept a cursory attestation to grant the exemption, Reiss said.

"You can't try and assess if the belief is rational," Reiss clarified. "You can ask them a tough question to gauge sincerity."

However, employers cannot discriminate in favor of organized religions and hence aren't allowed to request letters from clergy or priests as proof. Employees' rights to challenge accommodations provided by their employer are also protected by the Equal Employment Opportunity Commission with whom they can file an official complaint.

Employers can maintain high proportions of vaccinated individuals and still make accommodations for those with sincere religious beliefs as demonstrated by the Conway Regional Health System.

But allowing religious exemptions on the basis of how convincing the justification is, Reiss explained, is problematic because it opens the door for people who've attended anti-vaccine workshops or "people who are just better liars" to game the system.

According to Williams, vaccine hesitancy and the misuse of religious exemptions can be attributed to not only a gap in knowledge caused due to vaccine misinformation and disinformation, but also due to a lack of trust between individuals and public health experts.

"It comes down to something scaring them of the vaccine and they're using the religious exemption as a cover," Reiss said.

A common concern among vaccine opponents is the use of fetal cell lines in vaccine research and development, although not an actual ingredient in the vaccine.

When asked about alternatives to curb the spread of misinformation regarding vaccine side effects and composition and the misuse of religious exemptions, Williams suggested a collaboration with religious and faith leaders whom individuals have already built trust with.

"All major faith traditions support vaccinations. And they all support COVID vaccines as well," Williams said. Reverends and bishops across the country have started collaborating with governments to build trust in the COVID-19 vaccine. It then often comes down to individual interpretations of scripture that lead to religion-based anti-vaccine beliefs.

According to Williams, facilitating an ongoing conversation between faith leaders, public health experts and community members would provide for a safe space for individuals to voice their concerns and get answers in a comfortable environment.

With its relatively recent onset, experts agree that it might be too early to talk about the rate of religious exemptions on the COVID-19 vaccine mandate rollout.