75% of US population to see temperatures above 90 degrees during heat wave: Meteorologist 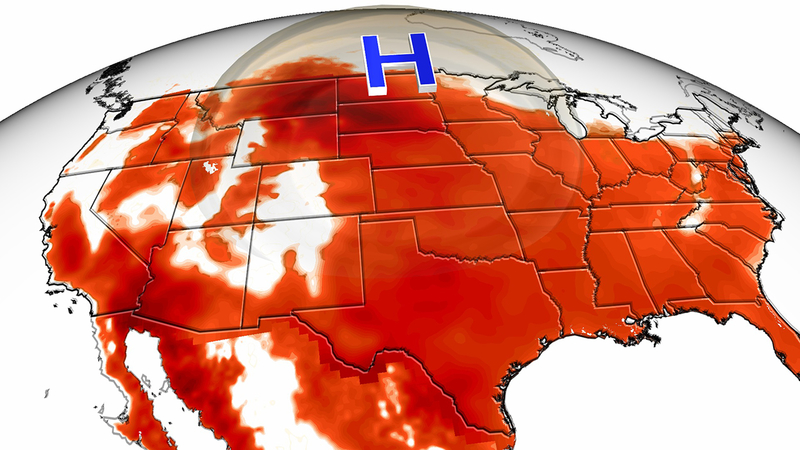 Heat and smoke from wildfires are spreading across the country this week, impacting air quality and prompting heat alerts from Canada to the Gulf of Mexico.

A ridge of high pressure has expanded over the US bringing a heat wave with high temperatures above average to much of the central portion of the country. "Around 75% of the US population will see a high above 90 over the next week, and 32 million people will swelter above 100," CNN meteorologist Dave Hennen said.

Over 40 million people across 18 states from Montana to Georgia are under some type of heat alert Tuesday.

It's hotter than normal, and it has been like this for several days. What you're experiencing is a heat wave. How did it form?

In the Northern Plains, daily record temperatures could again be reached on Tuesday, if dense wildfire smoke coverage does not keep the temperatures down.

More records could fall as the heat spreads southward. The highest temperatures will still sit over the Northern Plains, nearing 110 degrees in some places on Tuesday.

The heat paired with extremely dry conditions could spell bad news for the fire weather in the region in an already active fire season.

By Wednesday, temperature maximums shift south into the Central Plains. South Dakota and Nebraska have peak high temperatures midweek before a cold front pushes the heat out of the region and brings a chance for monsoonal moisture to move into the Northern Plains.

Moisture in the region creating storms will also cause heat index values to be in the triple digits from the Plains to the Lower Mississippi Valley.

"Greatest concerns over the next few days are the temperatures and associated heat indices," said the National Weather Service in Kansas City, Missouri. "Today, heat indicies are largely expected to be 95-100 F, with the exception across eastern Kansas and western Missouri where heat indices are expected to approach 101-103 F this afternoon. More widespread advisory conditions are expected Wednesday into Thursday."

The high-pressure system meanders southward toward the Southern Plains throughout the week, stationing over Oklahoma and Texas by the weekend.

Triple-digit temperatures peak there Saturday and Sunday before the heat returns to average by next week.

Across the West, 85 large fires are currently burning more than 1.5 million acres of land and are spouting massive plumes of smoke into the atmosphere being carried across the nation.

According to the National Interagency Fire Center, eight fires in the West produced pyrocumulus clouds on Monday. Pyrocumulus can create their own weather from the heat of the fires, but they also place smoke high in the atmosphere where it can be transported by upper air masses thousands of miles.

Near-surface smoke on Tuesday is blanketing the Pacific Northwest and Northern Plains, where it could keep high temperatures cooler amid the ongoing heat wave.

"The greatest concentration of smoke will be in the West with the fires, but the jet stream has carried the smoke again all the way into much of New England, including Boston," said Hennen.

Air quality alerts cover all of Maine, New Hampshire and Massachusetts and stretch southward to Washington, DC, due to smoke lofted by Canadian fires.

Higher in the atmosphere, smoke is covering almost the entire US except for the desert Southwest. Smokey sunrises will shift southward along the East Coast toward the Carolinas and Georgia throughout Tuesday into Wednesday. The Northern Plains will continue to see heavy smoke throughout the week as the Western fires continue to see dangerous fire weather conditions.