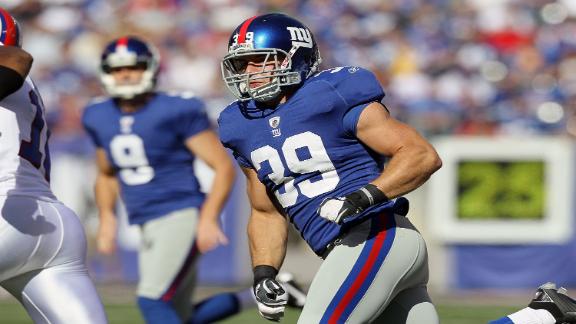 Former New York Giants safety Tyler Sash was arrested early Saturday morning in Iowa after leading police on a drunken scooter chase and being shot with a Taser.

Sash, who played two seasons with the Giants, was charged with public intoxication and interference with official acts by police in Oskaloosa, Iowa.

According to multiple reports, police spotted Sash at approximately 1:30 a.m. riding a motorized scooter with its lights off and asked him to stop.

Sash, however, reportedly refused on multiple occasions, leading police on a four-block chase before leaving the scooter and fleeing on foot.

Police eventually found Sash hiding behind a tree and, after the 25-year-old refused to come out, shot him with a Taser.

Sash declined a field sobriety test but admitted to drinking and was taken to Mahaska County Jail.

A sixth-round draft pick in 2011 who played in college at Iowa, Sash appeared in 23 games with the Giants. He was suspended in 2012 for violating the NFL's policy on performance-enhancing substances and was cut by the Giants prior to last season.