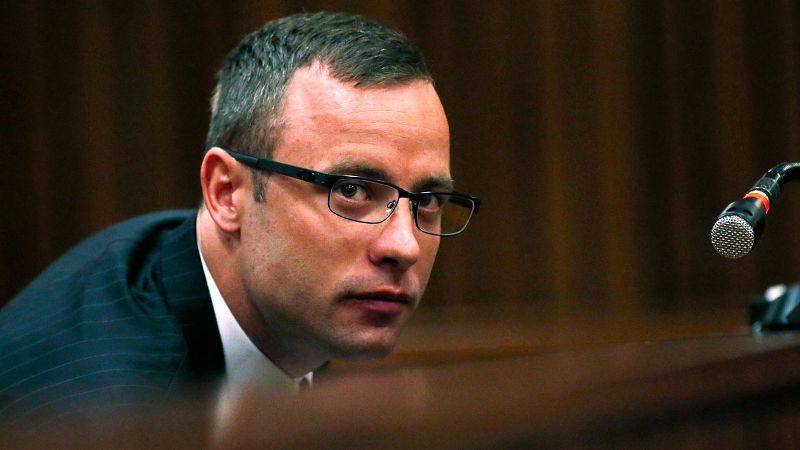 PRETORIA, South Africa -- A prosecutor hammered at Oscar Pistorius' credibility at his murder trial Thursday, asserting that the star athlete had a string of unlikely excuses for why he wasn't to blame in the three gun charges he faces on top of murder.

In casting doubt on the Olympian's honesty while cross-examining him, prosecutor Gerrie Nel was pushing the prosecution's argument that Pistorius is also lying about killing his girlfriend by mistake in the predawn hours of Valentine's Day last year.

Nel asserted that the double-amputee Paralympic champion wouldn't "accept responsibility for anything" and reacted incredulously to Pistorius' explanation of why a gun he was handling went off under a table in a packed restaurant, for which he was charged with firing a gun in public without good reason.

Pistorius said a friend's pistol, a Glock, went off while he was holding it but insisted that he hadn't pulled the trigger. A police expert testified earlier at the trial that the Glock couldn't be fired without the trigger being pulled.

Nel said: "We have you in possession of the gun, a shot went off, but you didn't discharge the gun? ... I'm putting it to you, you fired that gun. There is no other way," Nel said. "You are lying."

"I respect Mr. Nel's comment," Pistorius replied, "but I didn't pull the trigger on that firearm."

The incident in a trendy Johannesburg restaurant happened just weeks before he shot to death his girlfriend Reeva Steenkamp on Feb. 14, 2013.

Pistorius also said two witnesses, a former girlfriend and a friend, were both lying about an incident in 2012 when the runner is alleged to have fired his gun out the sunroof of a moving car. He has been charged with a firearms violation in this incident.

Pistorius said he wasn't guilty of yet another charge against him, illegal possession of .38-caliber ammunition found in a safe in his home after he killed Steenkamp.

Pistorius said his estranged father had put the bullets into the safe and that they belonged to the father. But Nel said Pistorius' father, Henke, had "refused" to make a statement to police on the ammunition being his.

"You just don't want to accept responsibility for anything," Nel said to Pistorius. Pistorius' answers to the accusations were short denials.

Pistorius, 27, says Steenkamp's death was a terrible accident after he mistook her for an intruder and fired four times with his licensed 9mm pistol through a toilet door and into a cubicle. Prosecutors say he intended to kill the 29-year-old after a loud argument heard by witnesses and charged him with premeditated murder -- for which he faces 25 years to life in prison if convicted.

Pistorius insisted again Thursday that the shooting was an accident and he did not intentionally fire four shots.

"I didn't have time to think about if I wanted to or didn't want to," Pistorius said. It was his fourth day on the witness stand, the first two days having been spent being questioned by his own lawyer, Barry Roux.

Nel also accused him of egotistical behavior in his relationship with Steenkamp, and described Pistorius' courtroom apology to his girlfriend's family on Monday as an insincere "spectacle" that ignored the feelings of her relatives. Steenkamp's mother, June, has attended court sessions this week.

"Your life is just about you," Nel said to Pistorius, claiming he wasn't "humble enough" to apologize in private to the family and away from the media glare of his murder trial, which is being broadcast live around the world.

Pistorius said his lawyers had been in touch with representatives of Steenkamp's family, and that he had believed the family of his girlfriend was not ready to meet him.

"I completely understand where they're coming from," he said. "It's not that I haven't thought about them."

Nel asserted that Pistorius was sometimes mean to Steenkamp, pressing him about her objection to him playing a song by American rapper Kendrick Lamar on a car stereo. Pistorius referred to the song in a cellphone message to Steenkamp that acknowledged her objections and has been included as evidence in the trial.

The prosecutor asked whether the name of the song was "Bitch, Don't Kill My Vibe," but Pistorius said he couldn't remember the specific song. Nel responded that Steenkamp would have been right to take offense, but "we can't ask her."

A phone message from Steenkamp to Pistorius that was shown in court includes the line: "You make me happy 90% of the time and I think we are amazing together but I am not some other bitch you may know trying to kill your vibe."

Two contrasting images of the double-amputee runner have emerged in court: the defense-led image of Pistorius as a contrite man who had been worried about crime and made a mistake on the night he killed Steenkamp, and the prosecution's depiction of him as an overbearing egotist who was obsessed with firearms and killed her intentionally.

On the relationship, Nel said he had checked all of Steenkamp's text messages on her phone and the phrase "I love you" appeared only twice in those missives. On both occasions, he said, they were written by Steenkamp to her mother.

"Never to you and you never to her," Nel said, addressing Pistorius.

"I never got the opportunity to tell Reeva that I loved her," Pistorius said in a soft voice. He did not look at Nel while replying to the prosecutor's questions, instead directing his gaze to Judge Thokozile Masipa on the dais.

Masipa will deliver a verdict because there is no jury system in South Africa.