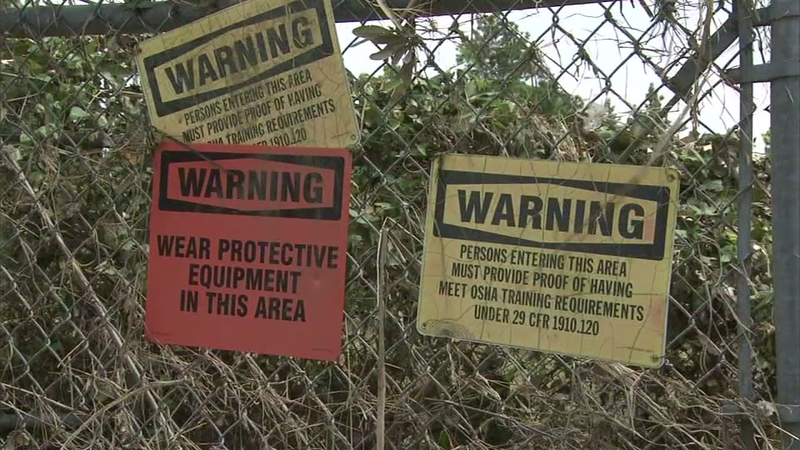 EPA approved a cleanup for the San Jacinto Waste Pits

HOUSTON, Texas (KTRK) -- Decades of burying what's described as one of the world's most toxic substances along the San Jacinto River put the area on the EPA's Superfund list nearly a decade ago. On Thursday, the EPA approved a cleanup for the San Jacinto Waste Pits.

"This is the greatest day in the history of this long battle, and in the future, because of what it means for the San Jacinto River and Galveston Bay," he said.

The EPA agreed to remove 212,000 cubic yards of the dioxin-contaminated material, after the floods from Hurricane Harvey breached the cap that had been installed to contain the toxic pollutant. Initially, the material was buried near the river, but subsidence over the years inundated the site. The flood more than a month ago released contaminated soil into the water. A single sample showed a dioxin level at 3,000 times the maximum allowable amount. The area involved is on the river near I-10 and Channelview/Highlands.

The EPA confirmed that Harvey flooding created a leak in the San Jacinto waste pits.

Over the years, cancer clusters have been blamed on the waste. Dioxin is linked to cancer and birth defects. Even now, lawsuits are still making their ways through the legal process.

"It's one of the highest cancer rates around," said Kathy Simmons, who grew up in the area, and returned recently to care for her sick mother. "There are medical studies on the amount of cancer here. I've had a lot of friends who've died, and on our one block five people have died of cancer."

The cleanup is estimated to cost $115 million, and will be done by installing cofferdams, draining the water around the submerged pits, and removed the contaminated material. The bill will go to the two corporations named as 'responsive parties' and liable for the cleanup.

The companies can appeal the decision. O'Rourke said he hopes they will do the right thing and move to get the site cleaned up and abated as quickly as possible.

On River Road in Channelview, which is within a few blocks of the waste pits on the river, there are the remains of what were homes destroyed by Harvey's flood. There is also a thick coat of silt over everything from damaged cars to storm debris, as well as the asphalt road. Dioxin can contaminate soil as well as water, so they worry that the dusty may be contamined as well.

"I just want this cleaned up fast," said Simmons. "Maybe if they hadn't dumped all that toxic waste in the first place."