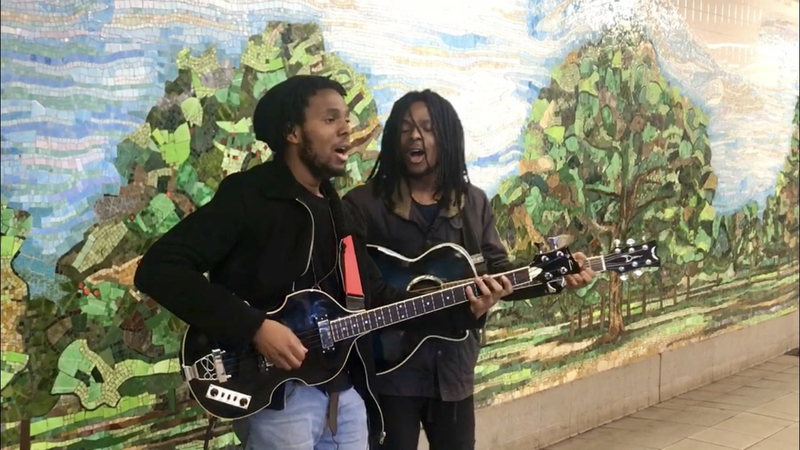 Sweet sounds of the Beatles from twin brothers from Bed-Stuy

BROOKLYN, New York -- If you only listened to them, you might think you were listening to the Beatles themselves.

But they are two twin brothers from Brooklyn, and their performances are sweet music to the ears of straphangers.

Amiri and Rahiem Taylor are identical twins, born and raised in Bed-Stuy.

The brothers are also featured in a viral video, that at last check had 18 million views.

one thing you have to do today is watch this video of amiri and rahiem taylor covering the beatles - they sound exactly like lennon/mccartney and it gives me serious chills pic.twitter.com/lr3r9ew5Dm

As children, their home was always filled with music, both jazz and classical.

But when their grandmother gave them a Christmas gift when they were about 15 years old, their musical world expanded.

The teens became obsessed with the Beatles rock band video game and fell in love with the group's universal sound.

Amiri and Rahiem also write and produce their own music and are half of the group Blac Rabbit, a psychedelic rock band.


About three years ago, the brothers wanted to go visit their mom in Puerto Rico but didn't have enough money.

They headed to the subway and started singing. In just three days, they made enough for two round trip plane tickets and spending money.

Incredible! THIS made my month! Today at 4 meet the identical twins who are taking social media by storm. The brothers from #Brooklyn are making sweet music together. The sky is the limit for @blacrabbitband @ABC7NY pic.twitter.com/XzRFgAG0dl

When they returned, they stopped playing for a bit and worked as cashiers in a grocery store but realized music was their passion.

They quit and have been jamming ever since. They hope to own their own record label one day and produce for other artists.