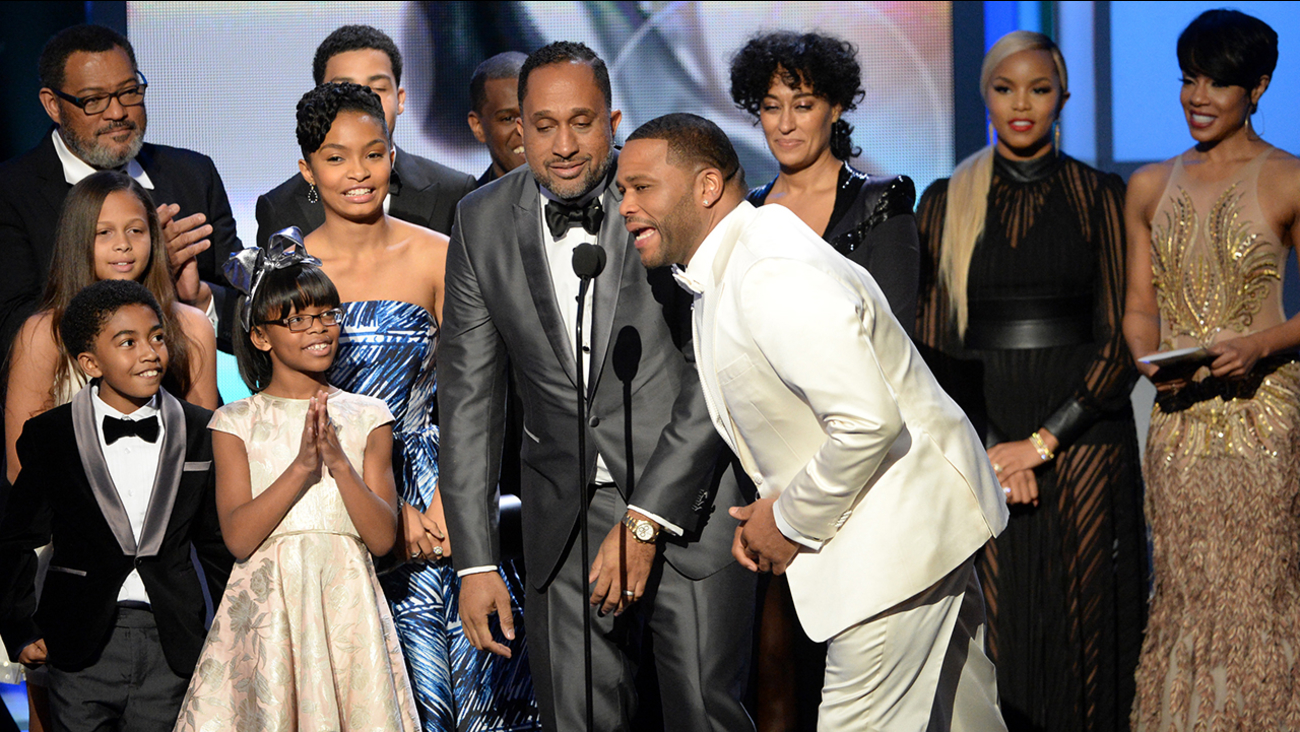 The cast and crew of "Black-ish" accept the award for outstanding comedy series at the 47th NAACP Image Awards at the Pasadena Civic Auditorium on Friday, Feb. 5, 2016, in Pasadena (Photo by Phil McCarten/Invision/AP)

"Why are these people so mad?" the African-American boy queries in Wednesday's episode of "black-ish," prompting the TV family's debate over how much to tell children about how harsh the world may or may not be.

The ABC comedy began its second season with a deft look at the increasingly casual use of the N-word, so it's unsurprising it would take on the even-thornier subject of police treatment of blacks through a fictional case in Los Angeles in which a black man was hit repeatedly with a Taser by officers.

But Kenya Barris, the show's creator and executive producer, said his goal was to prompt viewer conversations about how parents respond to the deluge of worrying information children face in these hyper-connected times.

The episode, which airs at 9:30 p.m. EST, "had less to do with police brutality and more to do with talking to your kids about the world they're living in and they can't avoid anymore" because of the Internet, their friends and myriad other sources, he said.

"How do you talk to your kids about hard things and not make scorched-earth whatever their experiences are going to be based on your experiences" and perspective, Barris said.

The question young Jack (Miles Brown) poses in the opening scene echoes one that Barris got from his own son, then 7, as they watched coverage of the Ferguson, Missouri, protests sparked by the fatal police shooting of Michael Brown, 18.

That said, Rainbow and Andre "Dre" Johnson (Tracee Ellis Ross, Anthony Anderson) and others in the family are blunt in their opinions about police treatment of blacks. The result is funny, provocative and unsettling.

"Not all police," says Rainbow.

"Yeah, only 92 percent. The other 8 percent are advisers on 'Law & Order' episodes," snaps back Dre.

The point is that that all individuals, black or otherwise, have their own perspective, Barris said, and that was key to "black-ish" from the start.

It's common for minority characters to be presented with a "monolithic vocal tone," he said. "We built the series to show we are really multilayered as people, not just black people but in general as a community of Americans."

The series, of course, also was designed to draw laughs. Barris recognizes that this week's episode may summon memories of those "very special" sitcom half-hours that ventured into deep waters, such as 1977's "All in the Family" episode about the attempted rape of gentle housewife Edith Bunker.

"I'm very interested and nervous as to the reaction. It's different from anything I've written before," said Barris.

It's also different from what TV tends to be, which is carefully detached from controversy to avoid upsetting sponsors or viewers. Barris credits ABC, which last week named Channing Dungey, the first African-American to head a broadcast network.

"This experiment called 'black-ish' has been an amazing journey, and it's been supported by the network in a way that I don't know that a lot of other networks would have," Barris said.
Related topics:
arts & entertainmentblack'ishabc
Copyright © 2020 by The Associated Press. All Rights Reserved.
More Videos
From CNN Newsource affiliates
TOP STORIES