1 / 108
Scarlett Johansson arrives at the Oscars on Sunday, Feb. 9, 2020, at the Dolby Theatre in Los Angeles.
Photo by Jordan Strauss/Invision/AP
Rain falls in LA as Oscars red carpet begins
KTRK
LOS ANGELES -- Oscars Sunday is the biggest night in Hollywood, so stars made sure to dress big for the occasion.

They brought glitz and glam to the 92nd Academy Awards at the Dolby Theater in Los Angeles. See highlights in the gallery above.

On an Oscars red carpet filled with dramatic dresses and designer tuxedos, Spike Lee and Natalie Portman wore clothing that made a personal and political statement.

Lee paid tribute to the Kobe Bryant in a Lakers-purple jacket with the late basketball star's 24 on its lapels and on the back, while Portman wore the names of snubbed female directors on her cape.

The two were among the standouts at the Academy Awards, but not the only ones. There was Billy Porter in a gold-feathered top and an orange silk overflowing skirt; Grammy-winner Billie Eilish wearing an oversized, fuzzy Chanel white suit, sporting a hairdo that was bright green on the top and black at the bottom.

Janelle Monae was among the stunners; she glided down the red carpet in a drop-dead stunning Ralph Lauren silver dress with long sleeves and about 170,000 Swarovski crystals, completed with a hood.

But the carpet wasn't all about the looks; there were plenty of memorable moments, including embraces between the stars, special connections with fans and those perfect red carpet poses.

The Oscars red carpet started with an unwelcome guest - hard rain and a blast of cold air.

Rain was a possibility for Sunday, so the carpet is protected with a large tent. But just as stars like Billy Porter and Tamron Hall arrived, the skies above the Dolby Theatre in Hollywood opened up in a downpour.
EMBED More News Videos

ABC7 Weather anchor Brianna Ruffalo gives an update on the Oscars red carpet forecast and how long the rain will stick around.

The position of some camera crews had them just outside the tent, sending them scrambling to find tarps and plastic to protect their gear.

"Oh my God, the tent is leaking," said one photographer who noticed a hole over the massive Oscars sign.

Harried staff ran around with squeegees trying to bump excess water off the tent.

Temperatures were in the high 50s on Sunday, which is considered cold in Los Angeles.

The downpour didn't dampen the red carpet looks of early arrivals, including Porter. The "Pose" star wore a glistening, gold metallic top with a feather effect and a full skirt depicting the interior of the Cupola Room at Kensington Palace.

Last year, metallic was queen of the carpet, with stars Jennifer Lopez, Glenn Close and Brie Larson all sparkling head to toe.

RELATED: Every dress worn by every best actress winner ever

RELATED: What 2020 Oscar-nominated actresses, actors wore on other red carpets this award season

What happens to red carpet dresses, suits after the Oscars and other award shows?

RELATED: Everything you need to know about the 2020 Oscars 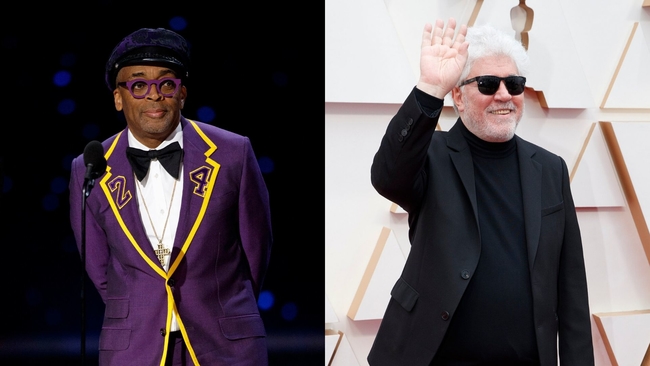