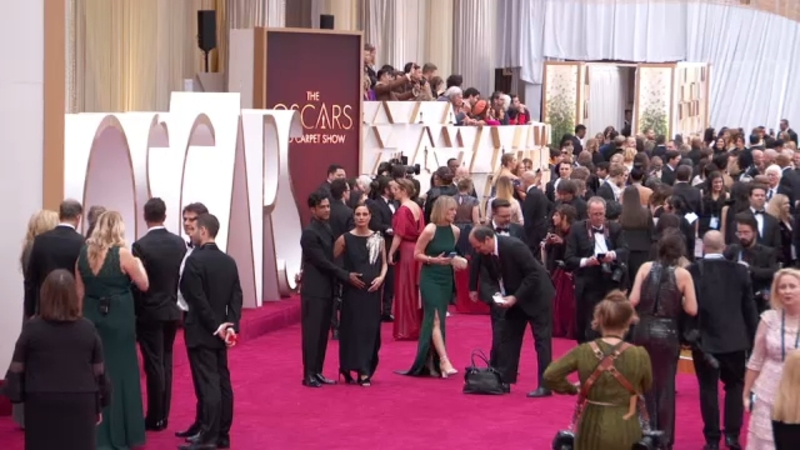 In a typical year, Hollywood's awards season provides work for an army of people including glam squads of hair and make-up people, of course, but also florists, limo drivers, waiters, parking attendants and so many more.

Those workers are suffering from what The Hollywood Reporter calls a "brutal hit" to their ability to make a living.

It's been called The Red Carpet Economy, where thousands work largely unseen by the public, performing all sorts of tasks.

This has been their busiest weekend of the year, until now.

"I think a lot of people are really hurting," said Eric Buterbaugh, who is known as the florist to the stars. "To be honest, I hate to say this but, it doesn't really even feel like The Oscars, really."

He is still the go-to floral designer, but right now his business must depend on gifting, for folks who send his floral designs to say "congratulations" or "thanks."

"Normally, during Oscars season we're doing four, five, six big parties and as those aren't happening this year, it's really a weird year for us," Buterbaugh said.

His famous attention to detail has kept him busy. Same with caterer Sean Heyman, but that doesn't mean business as usual.

"I had a full time assistant and she pretty much ran the office," Heyman said. "And I had to let her go."

His company fed firefighters battling last summer's blaze in the Angeles National Forest, but his big show business gig last year, feeding the crowd at The Critics Choice Awards, evaporated in 2021 when the ceremony went virtual.

"It will be a matter of starting all over," Heyman predicts. "But I like to think positive, and I think after a year or so, people will thirst for the more elaborate for what we were doing before this happened."

Mark your calendars: April 25 is Oscar Sunday. Live coverage begins Sunday morning and continues all day with special "On The Red Carpet" coverage leading up to the 93rd Academy Awards ceremony. After the last award is handed out, stay with "On The Red Carpet" for continuing coverage. Be sure to follow @OnTheRedCarpet on Facebook, Twitter, Instagram and TikTok for all your Oscar news and information.
Report a correction or typo
Related topics:
arts & entertainmentoscarsacademy awardsactorsandy kenyon
Copyright © 2021 OnTheRedCarpet.com. All Rights Reserved.
TOP STORIES
Isolated street flooding possible ahead of a rare June front overnight
Houston records over 100 more homicides compared to June 2019
14-year-old shot in face in argument over girl, deputies say
Mayor pledges $10K to catch a great-grandmother's killers
Memoir 'On Juneteenth' reflects on life in segregated Conroe
Former Sheldon ISD teacher accused of having sex with student
Former Houston mayoral candidate hopes to bring 3rd political party to Texas
Show More
Luby's finds buyer for cafeteria brand and 32 Texas restaurants
8 arrested during protest outside of Sen. Ted Cruz's home
Woman believed to be dismembered last seen alive 3 years ago
Woman with gunshot wound found in street near middle school
1 killed when SUV slams into pickup on Eastex Fwy
More TOP STORIES News