KTRK
ANAHEIM, Calif. -- This weekend, Disney lovers came from far and wide for the D23 Expo, billed as the "largest Disney fan event in the world," to celebrate all things Disney.

In addition to holding dozens of panels for fans, Disney used the weekend to make announcements about what's coming in its storied film, television and theme park businesses around the world. The company also gave a look at Disney+, its upcoming streaming service slated to launch later this year.

Here's a look at what was announced and discussed at D23:

Disney had previously announced that big changes were coming to Epcot, and the company offered additional details on Sunday. Disney said the park will contain four neighborhoods: World Discovery, World Showcase, World Celebration and World Nature. Click here to see what to expect in each neighborhood.

New ride, attractions at Disney properties around the world

Here's a look at some more of the announcements for Disney parks and properties around the world made Sunday morning:

-- New details about Star Wars: Galactic Starcruiser: This previously announced Walt Disney World immersive is a two-night experience that the company likens to a cruise. For the first time, Disney detailed exactly what guests will experience during Galactic Starcruiser.
-- Disney Genie app coming to Walt Disney World: The Disney Genie app will help park visitors plan out their day in Walt Disney World. It will offer customized itineraries geared toward visitors' interests and can help guests make park reservations in one streamlined experience. It's expected to debut in late 2020.
-- More details about Avengers Campus: Disney previously unveiled the name of the superhero-themed land coming soon to California and Paris, and on Sunday the company gave more details about what fans can expect inside the park. It will house Disney's first ride-through Spider-Man attraction as well as a new ride that lets visitors "step onboard a Quinjet and fly alongside the Avengers in an epic adventure to Wakanda and beyond" housed within the Avengers Headquarters.
-- Mickey & Minnie's Runaway Railway details: Disney's first major Mickey-themed ride-through attraction is coming to Disneyland in California and Disney's Hollywood Studios in Florida. Disney says: "With an original story and lovable theme song, Mickey & Minnie's Runaway Railway uses state-of-the-art technologies and dazzling visual effects to transform the cartoon world into an incredible and immersive multidimensional experience."
-- Hong Kong Disneyland transformation: Disney is working to revamp the park's castle, which will become the Castle of Magical Dreams. There are also two new "Frozen"-themed Hong Kong attractions in the works: Wandering Oaken's Sliding Sleighs and Frozen Ever After.
-- New Disney Cruise Line ship, island: Disney unveiled the Rapunzel-adorned Disney Wish as the name of its fifth ship that will set sail in January 2022. In the next few years, the cruise line will add a second destination in the Bahamas: Lighthouse Point on the island Eleuthera. Disney said: "The new destination will celebrate both the stories of The Bahamas and the natural environment of Lighthouse Point itself."

Beginning in 2020, Disneyland visitors will have a new parade to take in. Disney's Parks, Experiences and Products division announced Sunday morning that the "Magic Happens" parade will travel down Main Street, U.S.A. beginning in the spring.

Here's how Disney described the parade: "'Magic Happens' reminds us we don't need wings to fly, shooting stars were made to wish upon, and magic doesn't stop at midnight. This daytime spectacular will feature stunning floats, beautiful costumes, and beloved Disney characters - all led by Mickey Mouse and his pals."

The parade will feature characters from "Moana," " Coco," "Sleeping Beauty" and other Disney films. Singer-songwriter Todrick Hall will contribute an original song to the parade.

Disney also dropped a new poster for "Frozen 2," which is slated for a November 22, 2019, domestic release.

Check out the brand new #Frozen2 poster from #D23Expo. See the film in theaters November 22. pic.twitter.com/vLceqWLnsI

Cassandra Steele and Awkwafina are set to star in "Raya and the Last Dragon," which Disney said is "inspired by the culture of Southeast Asia." Steele voice Raya, and Awkwafina voices Sisu the dragon.

The cast of @DisneyAnimation’s new film Raya and the Last Dragon, @CassandraSteele and @Awkwafina join the filmmakers on stage at #D23Expo. pic.twitter.com/2J9um56pwU

The film will hit theaters in November of 2020.

Disney pulled back the curtain on its upcoming films during the second day of the D23 Expo in Anaheim, California.

Pixar has dropped a new poster from "Onward," which is set for a March 6, 2020, release in the United States.

Check out the exclusive poster & still from #PixarOnward that just debuted at #D23Expo. See the new film starring @tomholland1996 and @prattprattpratt in theaters March 6, 2020. pic.twitter.com/Inq5sUbUgR

"Onward" is set in a world much like our own suburbia, with airplanes, lawnmowers and smartphones. It follows teenage elf brothers Ian Lightfoot (Tom Holland) and Barley Lightfoot (Chris Pratt) as they set out on "an extraordinary quest to discover if there is still a little magic left out there," according to a Pixar press release.

Daveed Diggs, Phylicia Rashad and Questlove have also joined the cast, Pixar said Saturday. The film will feature original music from Jon Batiste and a score from Trent Reznor and Atticus Ross.

With an Oct. 18, 2019, release date, "Maleficent: Mistress of Evil" is the next release on Walt Disney Studios' film slate. The studio dropped new artwork showing star Angelina Jolie during its showcase session on Saturday.

On October 18, evil will reign. Here’s a brand new piece of art from #Maleficent: Mistress of Evil that just debuted at #D23Expo pic.twitter.com/1QbUZHlNFH

Emma Stone looks like she's up to no good in "Cruella." Disney dropped the first look at Stone in the titular role of the upcoming live-action film, which is slated for a May 28, 2021, release in the United States.

"Black Panther" grossed more than $1.3 billion worldwide, including $700 million domestically - a new record for a Marvel release. It was the first Marvel movie - and the first superhero film of any kind - to be nominated for best picture at the Oscars.

New poster for 'Star Wars: The Rise of Skywalker'

Lucasfilm dropped a new poster for "Star Wars: The Rise of Skywalker" during the Walt Disney Studios showcase on Saturday morning.

Check out the new poster for Star Wars: #TheRiseOfSkywalker that debuted at #D23Expo.

The Disney+ details keep on coming: Viewers can look forward to "Phineas and Ferb The Movie: Candace Against the Universe" premiering exclusively on Disney+. Pixar is also producing an exclusive collection of shorts entitled "Forky Asks A Question" that Disney announced Friday will be available to stream at launch.

Disney also dropped trailers for previously announced projects, including "High School Musical: The Musical: The Series," Lucasfilm's "The Mandalorian," the re-imagining of "Lady and the Tramp," "Encore!" and National Geographic's "The World According To Jeff Goldblum." Click here to watch the newly released trailers.

Lucasfilm's previously announced continuation of "The Clone Wars" will premiere in February 2020. Ewan McGregor will also reprise his role as Obi-Wan Kenobi in an untitled series for Disney+.

The Muppets will debut on Disney+ in 2020 with "MUPPETS NOW," a short-form unscripted series that will be exclusive to the streamer.

Hilary Duff returning for a "Lizzie McGuire" spinoff on Disney+

Disney hasn't yet said if any other original cast members have signed on for the new series.

Billed as the "largest Disney fan event in the world," D23 will feature the best of Disney, Marvel, Pixar, Star Wars and National Geographic.

On Friday morning, Disney CEO Bob Iger inducted a new class of Disney Legends. The Legends program, according to the company, "has honored many of Disney's brightest stars and notable luminaries" for the contribution to Disney's legacy. This year's honorees were:

Legends receive an award and a plaque in Legends Plaza on the Disney studio lot at the company's Burbank, California, headquarters. 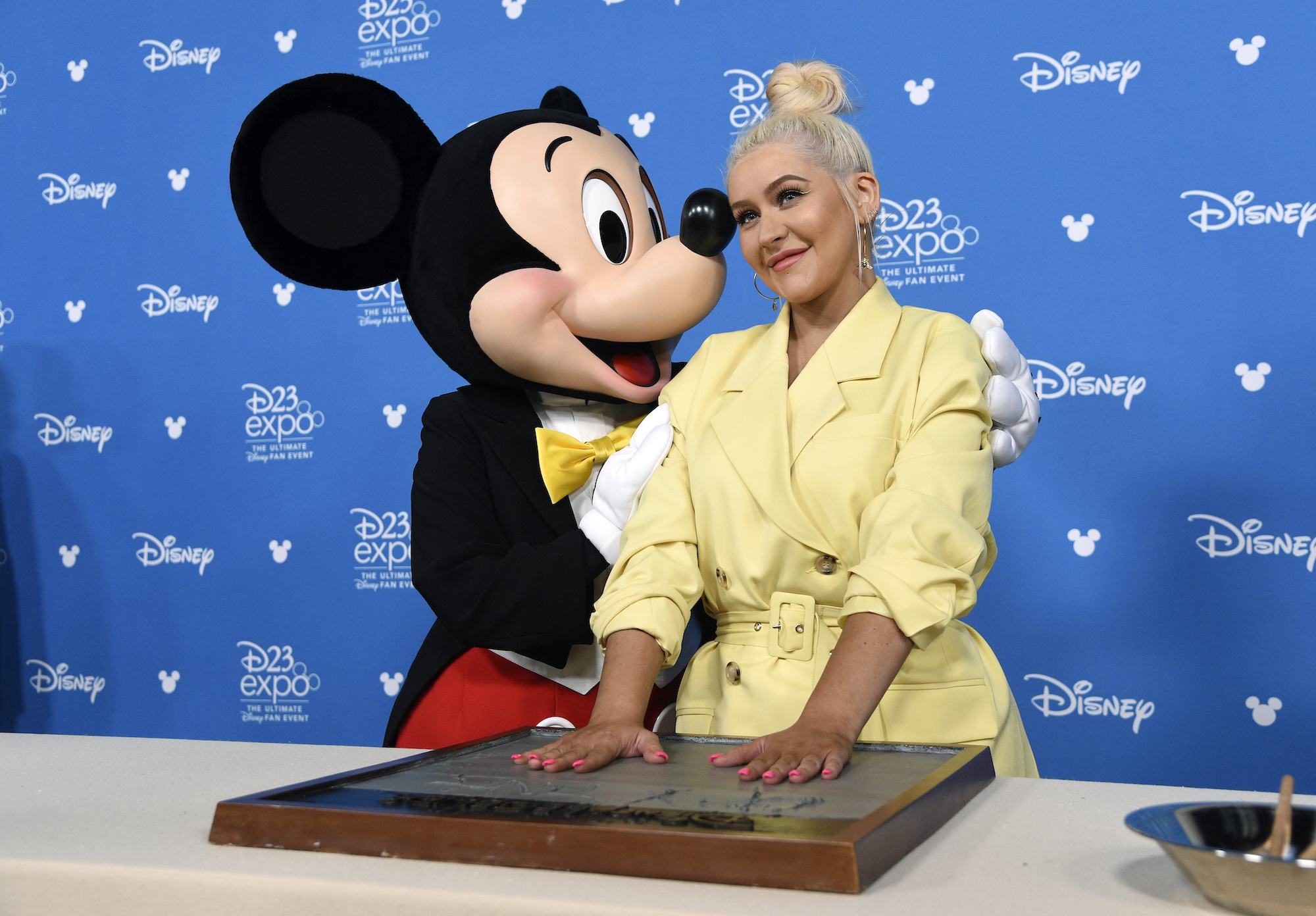 Singer Christina Aguilera gets a kiss from Mickey Mouse during her handprint ceremony at the Disney Legends press line during the 2019 D23 Expo, Friday, Aug. 23, 2019.

New experiences coming to Disney parks around the world

Park fans have a lot to look forward to! Disney has unveiled the following new experiences and attractions coming to its theme parks:

Disney is bulking up its content library with dozens of movies and series that will be exclusive to its upcoming Disney+ streaming service when it launches in November. Throughout the weekend, the company has released promotional posters for several of those films and streaming series, like the re-imagining of "Lady and the Tramp," "The Mandalorian," "High School Musical: The Musical: The Series" and "The World According to Jeff Goldblum" as well as new posters and artwork for theatrical-release films:

"One Day at Disney" book, docu-series for Disney+

Disney is pulling back the curtain to tell the stories of its employees (known as "cast members") across the globe in "One Day at Disney," a book and companion docu-series that will stream exclusively on Disney Plus, the company's upcoming streaming platform.

Here's how Disney described the book: "On February 21 of this year, nearly 80 different photo shoots took place all around the globe, as Disney dispatched photographers to capture images of employees and cast members who drive creativity and innovation at The Walt Disney Company. From Shanghai Disneyland and ESPN to Pixar and even the set of ABC's Modern Family, these dazzling photographs-and the memorable stories behind them-will be featured in the hardbound, collectible book, written by Bruce Steele and now available for pre-order."

The docu-series, which will premiere on Dec. 3, chronicles everybody from the Disney Imagineer who helped bring Star Wars: Galaxy's Edge to life to the actor playing Rafiki in the Madrid production of Disney on Broadway's "The Lion King."

The "One Day at Disney" docu-series on Disney Plus will shine a light on some of the talented men and women bringing Disney's most beloved stories to life.

The three-day event kicks off on Friday, Aug. 23, at the Anaheim Convention Center in Southern California just down the street from Disneyland. According to Disney, the bi-annual event "celebrates all the wonderful worlds of The Walt Disney Company under one roof, including the best of Disney, Marvel, Pixar, and Star Wars across film, television, theme parks, products, online, music, live entertainment, and more."

WHAT HAPPENS AT D23 EXPO?

When the D23 Expo was last held in 2017, Disney's announcements included new rides and other updates to its theme parks, casting announcements for upcoming films and the name and large-scale model reveal for Star Wars: Galaxy's Edge. Disney also released first looks at several of its upcoming films.

This year, Disney is expected to preview content from its upcoming Disney+ streaming service, which will feature movies and television shows from the company's vast library of content as well as new content created specifically for the service when it launches in November. 2019 also marks the first year that National Geographic will have a presence at D23 after Disney acquired an interest in the National Geographic Society's for-profit media business earlier this year.

Disney has posted the full schedule for Friday, Saturday and Sunday on the D23 Expo website. Here are some of the highlights, all in Pacific time:

If you can't make it to Anaheim for all the Disney fun, the company will offer a live stream of selected events and presentations across various social media platforms.

Everything to know about new Disney streaming service Disney+
D23