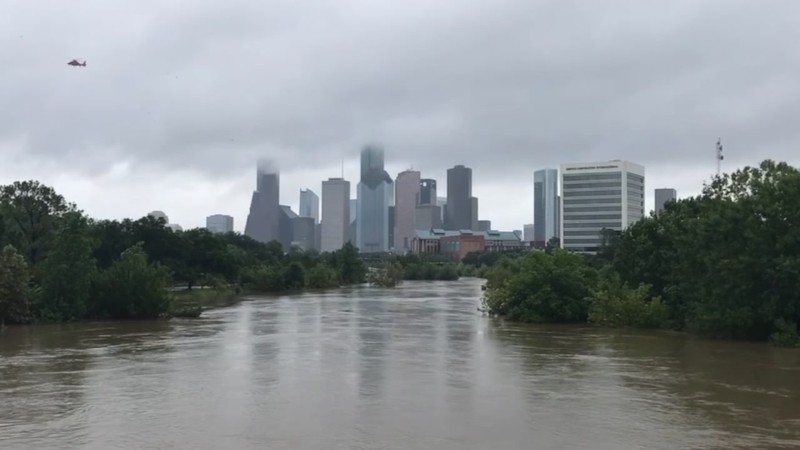 HOUSTON, Texas (KTRK) -- When it comes to the magic of making movies, it's all about location.

Though Houston may not have the movie sets like some big Hollywood studios, Ferguson says the city is a big draw to production crews because of the already existing city skylines and varying landscapes.
"You can get just about any kind of look that you want within about a 60-mile geographic radius of downtown," Ferguson said.

When Ferguson woke up to a flooded Houston on a late August 2017 morning, that geography and landscape changed.

"We were, I have to admit, a little worried after Harvey," he said.

Hurricane Harvey was dropping more than 50 inches of rain around the area. In the aftermath of the massive flooding, the major clean-up halted all productions and left the city covered in debris.

After overseeing more than 200 different production shoots in 2017 including two independent films, Ferguson didn't know how the city's film business would rebound. However, from the waters came heroic tales of rescue and survival that inspired movie makers.

Filming is now underway for a fictional movie based on the flooding, simply titled "Harvey."

"The movie is not taking place in the flood, it's what's going on during the flood," explained the independent film's executive producer, writer and director, Michael Sterling.

A Houston-native, Sterling wrote the independent film while watching the events unfold last August.
"Before Harvey happened there was a lot of stuff going on in the country, still, but at the end of the day, it was about survival and people came together to survive," Sterling said of the film's inspiration.

The production, like so many others that have shot in Houston, uses local crew and talent and isn't the only project in town in the storm's aftermath.

The Houston Film Commission counts at least seven productions that have followed Harvey to Houston.

"An awful lot of television, documentaries --several documentaries that originated from Europe, so they are producing things for an international market," said Ferguson.

The human spirit that was captured during the hurricane has propelled the city back onto the movie-making scene.

Houston-based producer Nkem DenChukwu says "Harvey" will be her 11th film shot in Houston, continuing to use the city for two reasons.

"I believe that Houston has untapped human resources and incredible locations," DenChukwu said.

Those locations, six months later, have mostly rebounded and are opening again for filming as the city finds itself in the running for several feature film shoots throughout 2018.

A movie based on Hurricane Harvey is in production in the Bayou City.