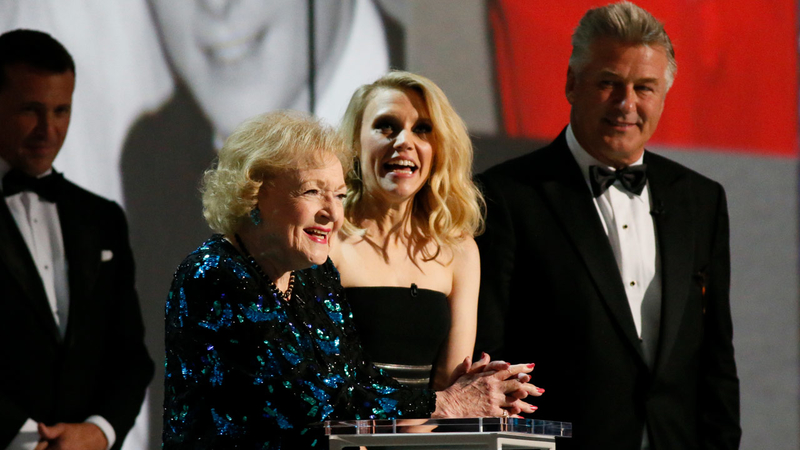 "The Proposal." It was a 2009 movie starring Sandra Bullock, but now will forever be the informal title of the 2018 Emmys telecast, thanks to a memorable romantic gesture from Emmy-winning director Glenn Weiss - who summoned the courage to propose to his girlfriend on live TV.

She said yes - thank the Lord. The stars in the audience responded with gasps (we saw you, Leslie Jones) and even tears (we saw you too, Queen Elizabeth - er, Claire Foy.)

That feel-good moment - along with crowd-pleasing speeches by Henry Winkler and Betty White - lightened the mood of an evening that otherwise had a lackluster feel, and disappointed many with the lack of ethnic diversity among its winners. 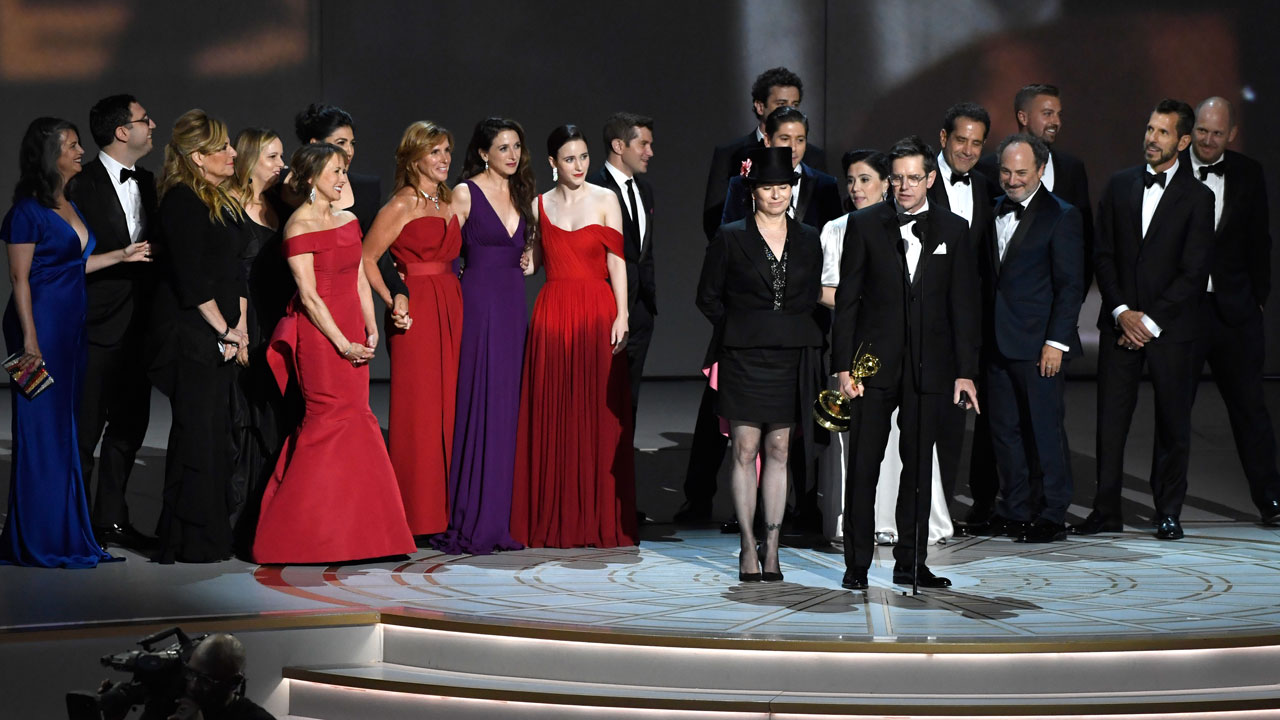 Some moments we'll be talking about:

Nope, they sure didn't solve it.

The Emmys began with a happy announcement - this was the most ethnically diverse group of Emmy nominees yet - and a cheeky musical nod to the diversity issue in Hollywood, a song aptly called "We Solved It!" Kenan Thompson, Kate McKinnon, Sterling K. Brown, Tituss Burgess and Ricky Martin, among others, sang - tongue firmly in cheek - about how far things had progressed, joined by a company of "One of Each" dancers.

But they couldn't have known how the evening itself would progress - award after award would go to a white winner. Presenter James Corden finally said what everyone was thinking. "Let's get it trending: #EmmysSoWhite," he quipped, a double reference to both Betty White, who preceded him, and the prevailing color of the evening.

The string was finally broken about halfway through when Regina King was awarded best actress in a limited series or movie for "Seven Seconds."

Henry Winkler accepts the award for outstanding supporting actor in a comedy series for "Barry" at the 70th Primetime Emmy Awards on Monday, Sept. 17, 2018.

Sometimes it just takes a little patience to achieve your Emmy dreams - like, four decades and six nominations worth of patience.

But who's counting? Not Henry Winkler, who bounded to the stage with delight to claim his first Emmy, more than 40 years after he was first nominated for his role as The Fonz in "Happy Days."

The crowd rose to cheer the 72-year-old Winkler as he accepted his trophy for best supporting actor in a comedy series for HBO's dark comedy "Barry," joking that he was giving a speech he wrote 43 years ago.

He quoted some Hollywood advice he'd been given, that "if you stay at the table long enough, the chips come to you."

"Tonight I got to clear the table," he said, and then jokingly told his (adult) children: "You can go to bed now. Daddy won!"

If that was a feel-good moment, what do you call the sublime appearance of 96-year-old White, honored for 80 years in television?

The star of "Golden Girls" and "The Mary Tyler Moore Show" got such a huge ovation from the crowd that she quipped: "I'm just gonna quit while I'm ahead."

"It's incredible," White said, "that you can stay in a career this long and still have people put up with you. I wish they did that at home."

And she showed she wasn't above - or beyond - a racy joke: "I want to thank Lorne Michaels for everything he's done with me. I mean, for me," she said of the "Saturday Night Live" creator and producer of the evening's telecast.

There was surprisingly little politics in the Emmys telecast; the name "Trump" was barely if ever mentioned. But "Full Frontal" host Samantha Bee got a few digs in.

Presenting the award for best drama actor with Taraji P. Henson, Bee was asked what drama she was watching. She was off and running.

"I'm on approximately season 9,000. Gets darker and darker, but I can't stop watching. You know, they really need to recast the lead."

She suggested others might want to try, er, lighter fare.

The #MeToo movement, on the other hand, was addressed right away by hosts Michael Che and Colin Jost.

"It's an honor being here, sharing this night with the many, many talented and creative people in Hollywood who haven't been caught yet," Che said, to laughs.

Jost noted that drinks were being served to the audience.

"The one thing Hollywood needs right now is people losing their inhibitions at a work function," he quipped.

Missing from the audience was former power player Leslie Moonves, the CBS Corp. chief who was ousted last weekend over sexual misconduct allegations. Che said one of the scariest things a Hollywood executive could hear right now is the message, "Sir, Ronan Farrow is on line one," a reference to The New Yorker writer who has specialized in #MeToo stories, including the ones that led to Moonves' downfall.

TALK ABOUT SEIZING THE MOMENT 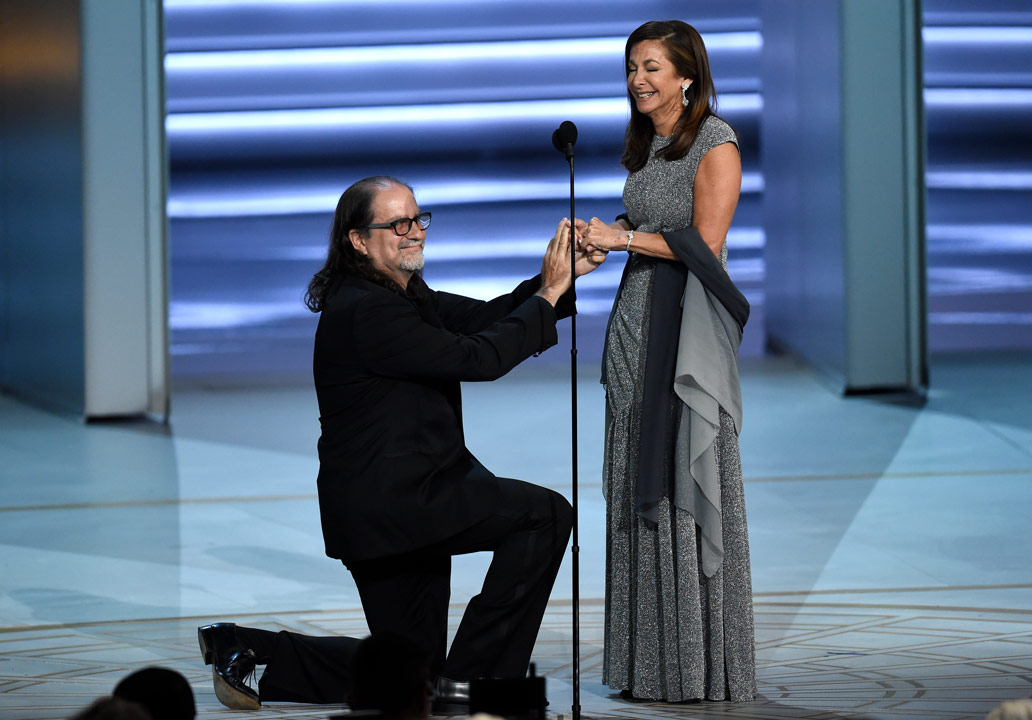 Glenn Weiss , left, proposes to Jan Svendsen at the 70th Primetime Emmy Awards on Monday, Sept. 17, 2018, at the Microsoft Theater in Los Angeles.

Glenn Weiss knows how to spice up an awards show. In fact, that's why he won an Emmy Monday - for directing the Oscars.

But he took his talent to new heights, using his acceptance speech to pop the question to girlfriend Jan Svendsen.

A stunned Svendsen made her way to the stage, where Weiss sank to his knee and presented her with the same ring his father gave his mother 67 years ago. Then, he asked. The answer was yes. PHEW.

Jost cracked later that there were "so many guys with rings who didn't win tonight."

And Emmy winner John Oliver thanked Svendsen for saying yes. "This could've been a very different evening," he noted.

NO PROPOSAL FOR RUSSELL AND RHYS

There were two sweet victories for the FX spy drama "The Americans," which concluded its six-season run in May with an acclaimed finale. The writing award for drama went to Joel Fields and Joseph Weisberg, and the best actor trophy went to Matthew Rhys, who played KGB agent Philip Jennings.

In his speech, Rhys acknowledged his longtime co-star and partner in life, Keri Russell, who lost out in the acting category to Foy.

He added that there would be no second onstage proposal that night.

"She said, 'If you propose to me, I'll punch you clean in the mouth.'"