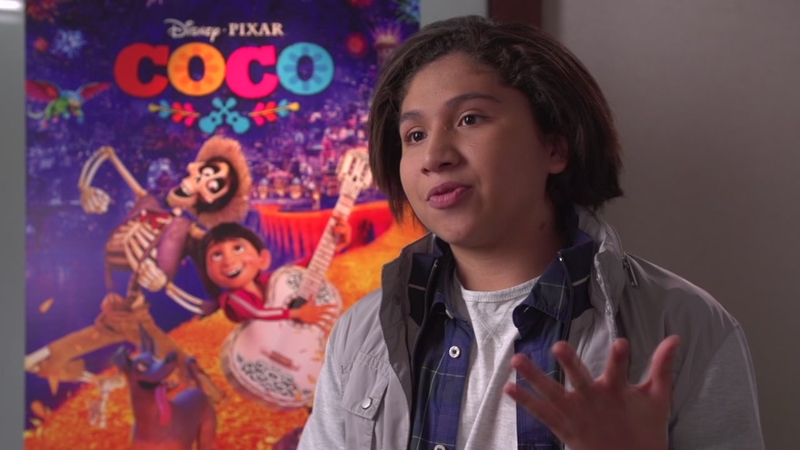 HOUSTON, Texas (KTRK) -- Disney-Pixar's blockbuster animated hit "Coco" is coming to Blu-ray and DVD, and the movie's star might just be the most excited teen in America.

Anthony Gonzalez portrays Miguel in the movie, a young boy who dreams of becoming a musician.

Gonzalez, 13, spent more than a quarter of his life involved with the project, and sat down with ABC13's Mayra Moreno recently to discuss life before and after the film.

He said he is not only happy and proud over the film's success, but what the film represents to Mexican American families.

"I couldn't believe I was going to be a part of a Disney-Pixar movie," Gonzalez said.

Gonzalez said he first auditioned for the film when he was just 9 years old.

"I started doing scratch voices, which is like, they put my voice in the character to see how it looks," Gonzalez said.

Then, at 11, the director told him to drop by for another round of voice recordings. Plus, he had a Christmas present for him.

"And I opened it, and it was this big wonderful artwork that said, 'You got the part,' and I couldn't believe it, I was so shocked, and I knew from that moment on my life would change," he said.

"Coco" not only won a Golden Globe, but is also an Oscar contender for best animated feature film.

The animated film is a first of its kind for Disney-Pixar, truly depicting a Mexican tradition: Dia de los Muertos, or the Day of the Dead.

The film struck an immediate chord with Gonzalez.

He said he's proud that many are getting to see why Day of the Dead is important for Mexican families.