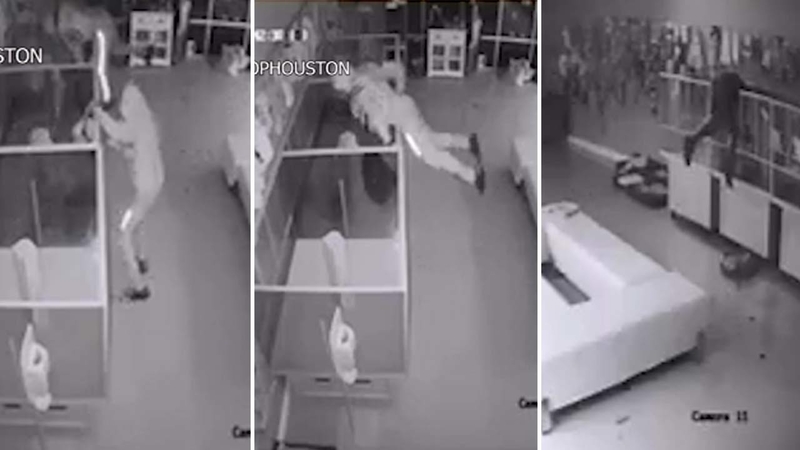 Thieves get off with $44K in puppies from Pets 'R Us

HOUSTON, Texas (KTRK) -- Police are looking for the puppy thieves who were caught on camera stealing five French and English bulldogs worth over $44,000 from a pet store in northeast Houston.

The whole thing happened in 40 seconds back on April 30 at the business in the 11500 block of E. FM 1960 near East Lake Houston Parkway. Police released video of the incident overnight.

The thieves, who wore hoodies and covered their faces, pulled up to the pet store in a black car.

One of them has what appears to be a sledge hammer and uses that to shatter the front window.

Once the men are inside, they head straight to the puppy pens, jumping over the cage wall. You can see one of the thieves teetering, feet in the air, as he stuffs the puppies in duffel bags.

The crooks sling the bags with no regard for the dogs.

On the way out, the man in the darker sweatshirt carries a bulldog that didn't fit in his bag. His friend keeps struggling at the pen. Finally, they're out.

Since the theft, three of the five puppies have been recovered.

But police still want to catch the men, who drove off in a black, newer model Honda Accord with what authorities describe as unique wheels.

Crime Stoppers will pay up to $5,000 for information leading to the charging and/or arrest of the thieves in the case.

If you have any information, you're urged to call 713-222-TIPS. All tipsters remain anonymous.