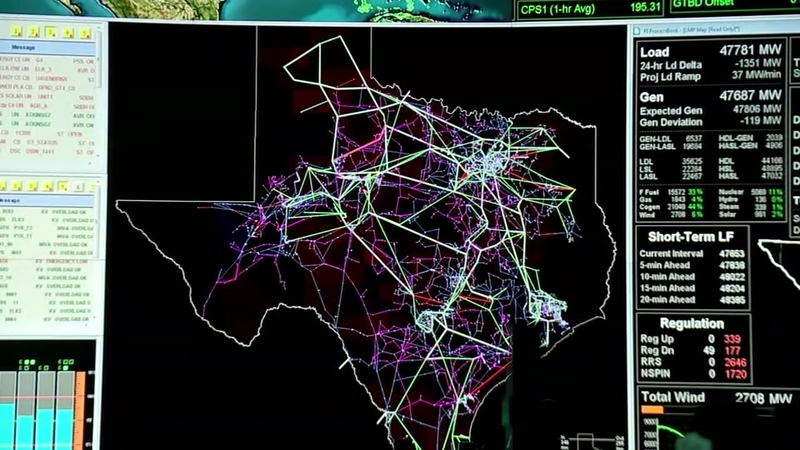 TAYLOR, Texas (KTRK) -- The organization that oversees nearly all of Texas' electrical grid can't rule out the possibility of rolling outages this summer.

ERCOT employees said that Texans could use a record amount of energy this summer.

If it happens, there's a possibility rolling outages would occur, which is a problem Texas hasn't experienced since 2011.

"I was frying an egg, and the power went out. I was like, 'Oh that's not good,'" Warren Lasher, ERCOT's system planning senior director.

On Tuesday, Eyewitness News got special floor access to see how it works.

Employees monitor the amount of energy being produced, and used. Seven years ago, a decision was made to implement rolling outages in the Dallas-area.

"That risk is greater this summer because of lower reserves, but that risk is always there on the system," Lasher said.

The gap between the amount of power, and peak energy use is about 11 percent. Last year, the number was nearly 19 percent.

They say the reason for the increase comes from more people moving to Texas, and the state losing energy suppliers.

According to ERCOT, rolling outages don't occur often, only three times within 30 years.

As for Houston, the city has not experienced a rolling outage in 12 years.

ERCOT said the chance of this happening is low, but they can't rule out the possibility.

"We did several extra training programs for our operators in the control room to make sure that they were familiar with all the procedures," ERCOT system operations senior director Dan Woodfin said.

"We've had to do additional work to prepare for operating those. For projecting how much they're going to be consuming, and producing on the system," Woodfin said.

The state is experiencing a growth with natural gas, wind turbines, solar panels and battery resources.

In the past, ERCOT officials said it took three years to complete the product. Now, it's a fraction of that time, which may help solve the state's shrinking power gap.