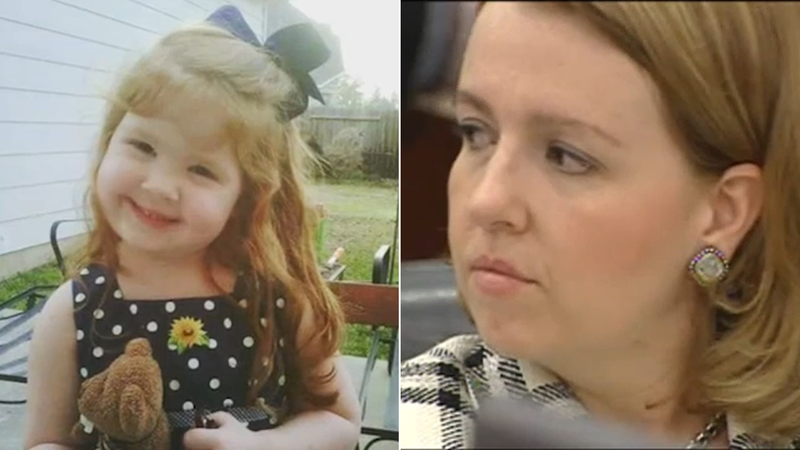 Mom of murdered girl up for parole again, frustrating family

SPRING, Texas (KTRK) -- Year after year, the father and paternal grandparents of a 4-year-old killed by her mother's boyfriend are forced to relive the horrendous details.

Emma Thompson died in Spring in June 2009. Investigators said at the time of her death, Emma had a skull fracture, more than 80 bruises, cuts on her head, evidence of blunt force trauma to her abdomen and a severed pancreas. The medical examiner also found evidence of sexual assault.

Emma's mother's boyfriend, Lucas Coe, was sentenced to life without parole for the preschooler's death.

Her mother, Abigail Young, was found guilty of reckless endangerment of a child by omission for concealing what was happening to her child from family, doctors and CPS.

"She delayed taking Emma's lifeless body out to her car," Thompson said. "She bleached the tub, the faucets, the drains, the walls, the doors. She washed Emma's body."

Abigail Young was found guilty of reckless endangerment of a child by omission for concealing what was happening to her child from the family. Now, she's up for parole again but the grandparents of the young victim believe Young is still a "clear and present danger."

Young, who was a nurse at the time, was sentenced to 20 years in prison.

Just 19 months after being sentenced, Young came up for parole. Thompson said her family was stunned. Parole was denied.

Thompson worked with Andy Kahan from Crime Stoppers to get a law passed, Emma's Law, that would prevent people convicted in felony cases involving children from coming up for parole review annually. She hopes it would allow the families more time to heal and grieve the unimaginable loss they were experiencing.

Unfortunately, Thompson said they were only granted the right once. Young comes up for parole every year now.

Thompson estimates they have been through the process at least eight times. Every year, it lasts from two to four months.

They are currently going through it again.

"You are reliving the horror of what Emma went through every single time," the grandmother said.

According to the TDCJ website, Young will be released in 2030.

Now that she is more than halfway through her sentence, Thompson and her family fear the parole board will seriously consider letting her out of prison.

Wanting Young to serve her entire sentence is not about being vindictive, according to Thompson. She said it is about justice for Emma.

"The release of these violent offenders whether it's parole or it's a bond... That's adding insult to injury," Thompson explained. "That says that child's life did not matter. That says the person who committed the crime is more important than the child who died at the hands of the criminal."

Thompson asks family, friends and anyone who knew Emma to write letters to the parole board saying that Young should remain behind bars.

She asks that anyone who feels compelled by the details of the abuse Emma faced to email victim.svc@tdcj.texas.gov.

Thompson said people in Liverpool and Australia write letters on Emma's behalf for the parole hearings.

In the meantime, the grandmother is working alongside Kahan to close the loopholes in Emma's Law. She said she is doing it not just for Emma, but for the families of all the other children that have been abused or killed.