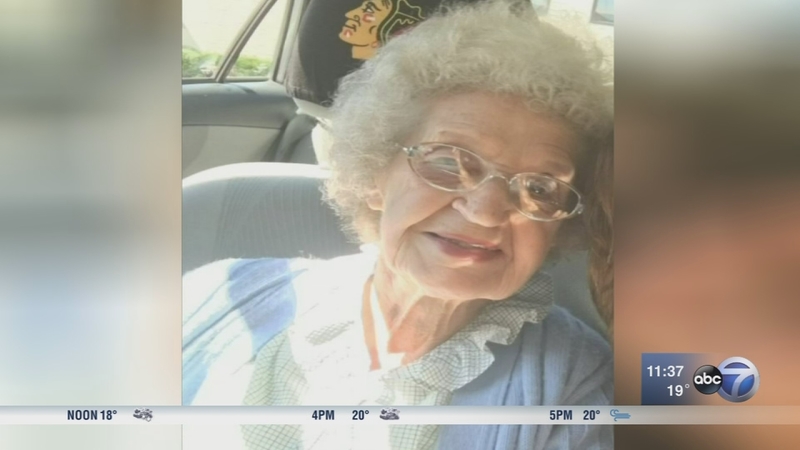 CHICAGO, IL -- Police are looking for a man who allegedly beat a 94-year-old woman, stole her purse and took off in a stolen vehicle before crashing it in Chicago's Garfield Ridge neighborhood.

Dusk said she was waiting for one of her daughters outside her building in the 5100-block of South Long Avenue to pick her up to go to the dentist when she was attacked around 11:50 a.m. Wednesday. Police said a man pushed Regnier into the hallway of her building.

"This man just came in the gangway and assaulted her, beat the **** out of her, took her purse and ran," Dusk said.

Regnier was rushed to MacNeal Hospital, where police said her condition stabilized.

Dusk said her mother was transferred to Edwards Hines Jr. Veterans Administration Hospital, where she is in serious condition, but stable.

"She's in the hospital right now with three fractured ribs, a black eye, a big goose egg on her head and a possible concussion," Dusk said.

Police said a short time after the attack, officers found an abandoned SUV in an alley in the 5700-block of South Archer Avenue, behind Villa Rosa Pizza, about a block away from Regnier's home. Police learned the vehicle had been reported stolen.

Surveillance video from the restaurant shows the suspect ditched the black SUV after hitting a dumpster. He appeared to be holding the woman's purse as he ran away. Police have not said who the vehicle belongs to.

Police are looking for a man who allegedly beat a 94-year-old woman, took her purse, stole her car and crashed it Wednesday on Chicago's Southwest Side.

Villa Rosa Pizza, where the victim's son works, offered a $5,000 reward for information leading to an arrest.

The suspect was described as a 30-year-old African American man with short black hair and a beard. He was wearing a brown leather jacket and dark-colored pants.

Regnier's family said her recovery could be long and difficult. They're struggling to understand why someone would purposely hurt an elderly woman.

"She's 94 years old. He didn't have to beat her up. He could have just taken her purse and left. I don't know what compelled him to do that. He's a coward," Dusk said.

No one is in custody. An investigation is underway.

Anyone with information regarding the suspect or the robbery should call the 8th District police at 312-747-8730.