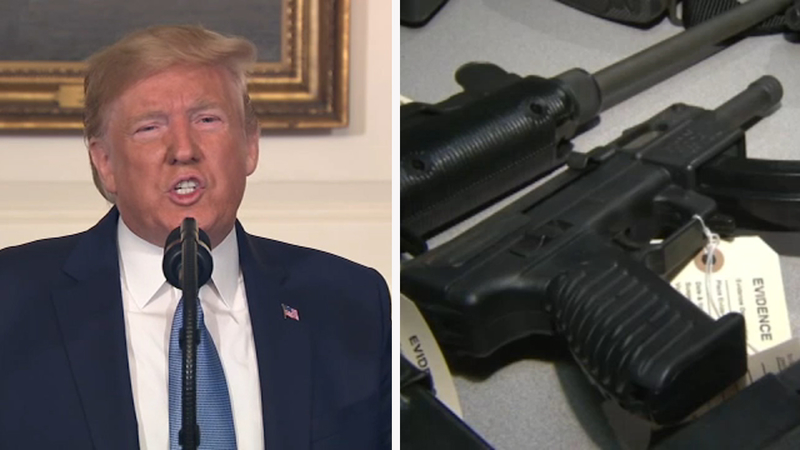 In the wake of the weekend shootings in El Paso and Dayton, Ohio, President Trump suggested Monday that it is time to give Americans something to do when they see the warning signs of violence. In his White House address to the nation, Trump advocated for so called Red Flag or Extreme Protective Order laws.

"We must ensure that those judged to pose grave risk to public safety do not have access to firearms and if they do, those firearms can be taken through rapid due process," Trump said.

Red Flag laws have to do with the guns that are already in people's possession. It's not necessarily about keeping people from buying new guns, instead, these are laws aimed at trying to keep people from using guns they already have.

According to a study from Everytown for Gun Safety, 51 percent of mass shooters give warning signs something is about to happen.

In the run-up to the shooting at Parkland High School, people who knew the shooter told reporters he once introduced himself as "a school shooter." In Sutherland Springs, the Baptist church shooter posted worrisome thoughts on social media and a neighbor heard rapid unexplained gunfire in the days before the shooting. Before the Pulse nightclub shooting in Orlando, Florida one colleague of the gunman said, "I saw it coming."

Fifteen states and Washington, D.C. have Red Flag laws - a way to take someone's guns away from them temporarily if they are a danger to themselves or others.

Red Flag laws can still provide due process, a judge has to sign off on the order - and usually don't require a mental illness diagnosis.

Under existing law, the only way to seize someone's guns temporarily is to have someone involuntarily committed to psychiatric treatment.

In Texas, Governor Abbott briefly supported a Red Flag law after the Santa Fe school shooting last year but backed off in the face of Republican opposition.

The NRA has not supported the laws and today said it supports limiting access for people who should be admitted for treatment - a subtle way to say their opposition to Red Flag laws has not gone away.

Have a tip for Ted Oberg? A problem to solve? Get in touch with us on our tip page, or send a tip below. (On mobile? You can open our form by tapping here.)
Report a correction or typo
Related topics:
washington dcgun safetygun violencemass shootinggun laws
Copyright © 2022 KTRK-TV. All Rights Reserved.
TOP STORIES
Daylight shows home destroyed after standoff with shooting suspect
What we know about man accused of shooting 3 HPD officers
Widow delivers heart-wrenching eulogy for NYPD detective
Suspect arrested after 30-minute chase ends on I-45 in Texas City
Rainy Monday and arctic cold front on the way after sunny weekend
5 people charged in connection with Pct. 5 corporal's murder
How many times can I reuse my N95 mask?
Show More
Decades after TV anchor disappears, convicted rapist denies connection
Driver dies after slamming into 18-wheeler's trailer on US-59
Woman shot in the shoulder during robbery set up in SW Houston
Prepare for a major closure at I-69 and 610 West Loop this weekend
Officers escort body of corporal killed in ambush to funeral home
More TOP STORIES News