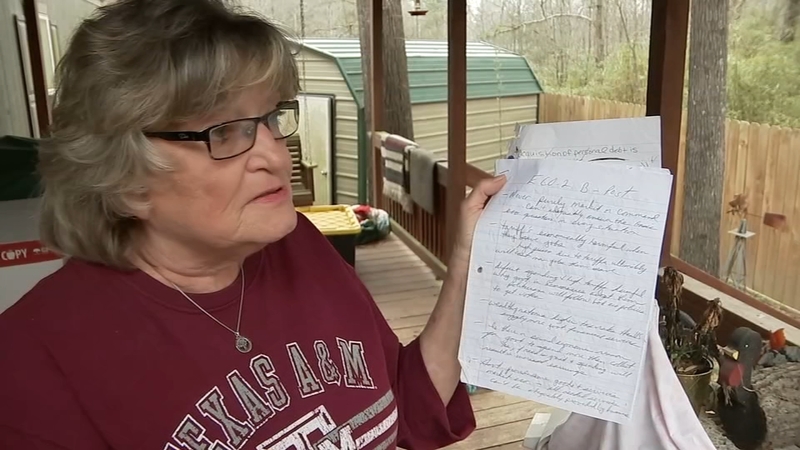 Teacher accused of cheating says she did nothing wrong

LIVINGSTON, Texas (KTRK) -- A teacher at the center of a cheating scandal at Livingston ISD said she has done nothing wrong.

Earlier Tuesday, the school district released a statement saying a teacher had been fired and a principal had resigned after allegations of cheating and fraud.

The district said a recent audit requested by the superintendent of schools found that students were fraudulently admitted into the school who did not meet at-risk criteria and/or were not Livingston residents.

In addition, the audit alleged that Davis provided students with all the test questions and answers in binders, which "resulted in students accelerating through classes required for graduation at astronomical speed, some completing entire semester courses in mere minutes and an entire high school curriculum in weeks."

Breah Harrison, a recent graduate of the Academy, confirmed that she was able to complete senior year economics, government, and English classes within two weeks.

"To be done in two weeks with a whole year worth of work, it was really short," said Harrison, who added she didn't feel like anyone actually taught her the material.

"There were two teachers there at all times, but they were on their computers," she recalled. Any time a student would have a question, they'd say, 'Look in the binder.'"

"I was upset over it," said Stephanie Robison, Harrison's mother. "She thought she had finished the program, she went through the core process of it."

Harrison and all students in the current Academy class are being told they must retake their tests next week in order to graduate.

Meanwhile, the principal of the Academy resigned after being presented with the findings from the investigation, with an audit saying that there was gross negligence in his oversight of the classroom.

However, Davis did not resign or retire. She was forced to pack up her classroom last week, and all the notes that are at the core of the audit are now stacked up in boxes on her patio.

"They're just notes, with answers," she said as she pointed out that she had hand-written the notes in the Academy's first years, and then typed them up, per direction by school administrators. "How did you ever study for a test? Did you have notes? And study them?"

Davis says up until she was sent packing, 478 students had graduated from the Academy over the past five years. It's unclear at this point whether students from previous classes will be required to retake their tests or are in danger of getting their diplomas rescinded.

"I am devastated," said Davis, who plans to fight the district and the TEA. "The kids depended on me. I'm the only one that pushed them to graduate. Ask all 478 of them."

"A recent audit conducted at the direction of the Superintendent of Schools revealed substantial admission and academic policy violations at the Livingston High School Academy. The campus principal resigned when presented with the investigative findings, which revealed that students were fraudulently admitted into the Academy that did not meet at-risk criteria and/or were not Livingston residents. The audit also revealed gross negligence in his oversight of the classroom and conduct of its lead teacher, who was terminated by the Board at the special called meeting held on February 3rd, for cultivating academic dishonesty in her classroom. Binders were prepared by the teacher containing test questions and answers for students to use when completing course work and examinations. This resulted in students accelerating through classes required for graduation at astronomical speed, some completing entire semester courses in mere minutes and an entire high school curriculum in weeks.

The District is acting swiftly and in collaboration with the Texas Education Agency to remediate the violations. This will require all Academy students illustrate mastery to regain credit awarded in all core courses during the fall 2019 semester. Letters were sent to parents of students impacted.

The Livingston ISD school board believes in the value of alternative education for students at-risk and supports the Superintendent's efforts to regain the integrity of the Academy program."