Rodeo rejects student's painting because of gun in artwork 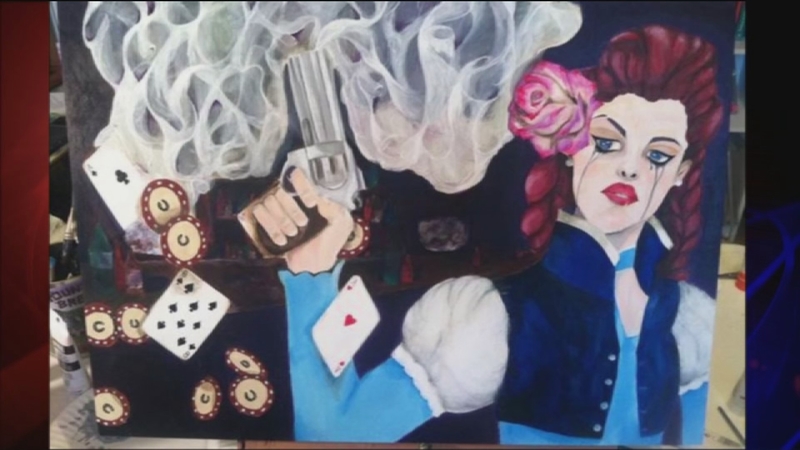 Rodeo reject student's painting because of gun in artwork

HOUSTON (KTRK) -- The Houston Livestock Show and Rodeo helps a lot of students raise scholarship money through its student art auction. A 17-year-old Splendora High School senior was poised to be one of them, or so he thought.

Tuesday, Chase Otts' parents were belatedly informed by the school his painting, which had been awarded a gold medal by the rodeo's district art contest judges had been rejected by the organization's art steering judges. His painting, "Dirty Cheaters' Club" would not be in the auction, which means no chance at scholarship money.

"I would never intend to offend anyone," said Otts, who was stunned by the belated rejection. "I wanted to be innovative and inspire. I'm so tired of cows and cowboys robbing banks, and little kids in cowboy boots."

The painting shows a dance hall girl, crying, holding a smoking six shooter, with cards of aces and eights known as a dead man's hand.

A statement issued by the rodeo said the painting violated its no violence rule.

His mother, Tammy Ottts, an artist herself, calls the decision "wrong, wrong, wrong."

"They tell them to use their imagination(in the contest). That painting was depicted the Old West -- a saloon, a gun, and a dead man's hand," she said.

She and her husband, Ricky, say the painting should still be put up for auction, and "let the bidders decide."

At the very least, the family wants the painting returned. It remains in the possession of the livestock show, despite its rejection.

Chase Otts, who is working on his Eagle Scout certification, has only the paperwork from the school art competition declaring him a winner, and complimentary sticks from him and his family. He says he intends to use them.