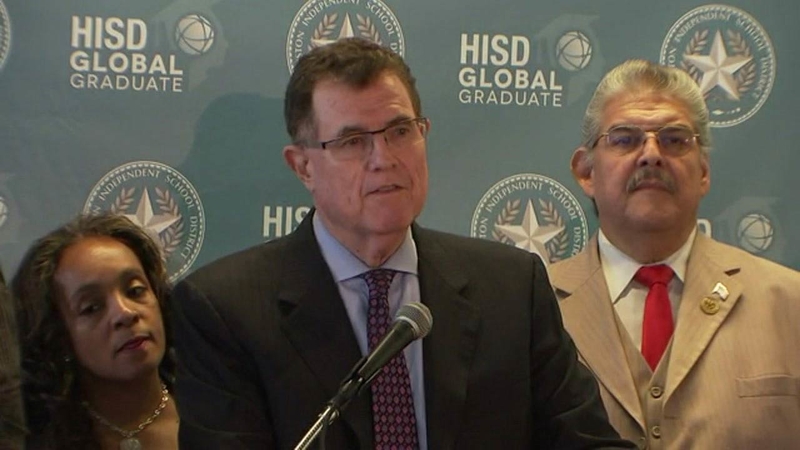 "You can't be superintendent in Houston forever, even though you might want to. You just simply can't," Grier said at a press conference Thursday afternoon. "Quite frankly it's just time."

One former Federation of Teachers official told us she doesn't think it's a coincidence that he Grier resigned hours after news broke that an audit found possible illegal activity surrounding contracts for school construction projects.

Dr. Grier's announcement was met with approval by many of the people we spoke with afterwards.

"Dr. Grier has had a longer tenure as superintendent than most superintendents in urban areas. Too much of that time has been brought with turmoil," says Houston Federation of Teachers President Zeph Capo.

The latest turmoil from an audit that found HISD did not get board approval for several construction projects, and overpaid contractors. District leaders say they'll ask for their money back from contractors they overpaid. And auditors asked HISD officials to keep better tabs on spending.

"It's gonna take 20 years for them to fix what he's done," Gerry Monroe says.

"I was really hoping he'd be stepping down a little bit sooner," says Chris Parish.

Parrish's son is a freshman at Waltrip High School. This father gave Grier's tenure a C.

"We've seen a lot of schools in the area that are going downhill, test scores are one of the biggest factors. They're going down."

We asked Quince Washington, whose son is also a freshman at Waltrip, if he's pleased with Grier.

"Not exactly. But in the past compared to the others we've had, yeah," he says.

Both say they know what they'd like to see in a replacement.

"I would hope we would do a search and move somebody in that has a better handle on urban needs and the sensitivity to the community in terms of school closures and the rebuilding process is slow," explains Washington.

"I'd like to see someone more of the people. Terry Grier seemed to be sitting on his throne and looking down on everybody else. I'd like to see somebody maybe from Houston that really wants to put time and effort into getting this community back on its feet again," adds Parrish.

At 65, Grier receives $300,000 a year under a contract that was to expire next June 30. His resignation is effective March 1. No word from the board on a list of potential replacements or a timeline.

The Houston school district is the nation's seventh largest, with about 215,000 students enrolled.