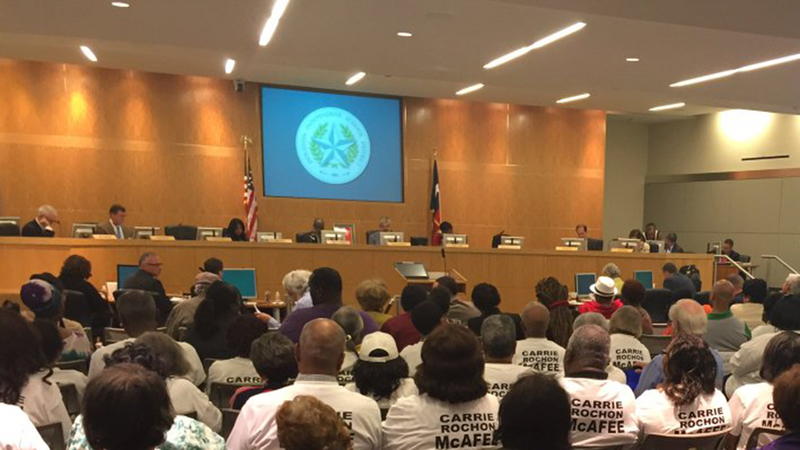 HOUSTON (KTRK) -- The HISD Board of Trustees voted Thursday night to rename seven schools that were named after people with ties to the Confederacy.

Dozens of people walked out of the meeting angry. Some believe their history was being rewritten. But they all say the renaming process was never about the community the trustees serve.

Here's a list of the schools that were renamed, along with their new names:

Trustees voted Thursday evening to rename Dowling Middle School after the late Audrey Lawson; the mother of our own Melanie Lawson. The school will be named Audrey H. Lawson Middle School.

@HoustonISD We r so proud & we know Mom would be thrilled! Children & education were what she lived 4. Thanks 2 the Board! @abc13houston

We spoke with Reagan High School alumna Rae Potter Nash moments after the board voted to change Reagan to Heights High School.

"When you die, your loved ones know to put in your obituary the last thing that's ever gonna be written about you on this earth. They know to put you went to Reagan High School," she said.

She believes they had no desire to hear what opponents of the renaming had to say, and claims their time to speak tonight was cut short.

"It's a joke. Those people don't care about children. They can do it, so they're gonna do it. That's it," she added.

Trustees voted to rename seven schools that were named after people with ties to the Confederacy. Perhaps the most controversial vote was to rename Dowling Middle in the Hiram Clark community. A large group rode a charter bus to the meeting clad in shirts expressing their support for the former principal Carrie McAfee.

"They did not get in touch with the community as to what person we wanted. They knew the whole time we wanted Ms. McAfee," said McAfee supporter Ray Washington.

The group says they submitted her name long before this process started. But they believe their trustee, Wanda Adams, had a different agenda to rename it after Audrey H. Lawson.

"She deserves to have a school named after her," said lifelong Third Ward resident Dr. Pamela Boveland. "But it needs to be a school in Third Ward."

"When I learned that this proposal was in direct opposition to the desires of the school, I withdrew her name. People who loved and supported Audrey pushed on anyway," she read from the letter.

Despite requests from the community to hold off, or to name a school in Third Ward after Lawson, the board voted in favor of Audrey H. Lawson Middle School.

"They ignored us. And our trustee Wanda Adams stabbed us in the back," said Hiram Clark resident Linda Scurlock.