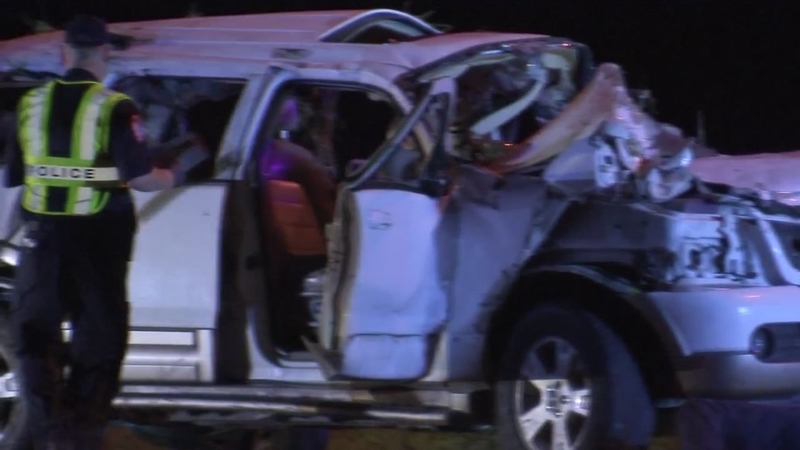 Six dead on chase and crash in Edna

EDNA, TX (KTRK) -- Six people are dead and two people were arrested after a police chase Thursday morning in Edna, a town northwest of Victoria. Human smuggling is suspected in this case.

The crash happened on Highway 59 after police say they tried to stop a Ford Explorer for a traffic violation. The driver wouldn't stop, so police gave chase.

Police say the vehicle fled north on Highway 59 feeder, but then turned around at the dead end of the feeder road and headed back into Edna. The vehicle turned onto Highway 59 northbound at County Road 300. Officers say they believe the driver thought to take the Loop 521 exit, then at the last minute decided to continue on Highway 59 North.

Police say just after 1:30am, the driver appeared to over-correct, rolling or flipping the vehicle several times, ejecting four people inside. Three people were flown by Life Flight to area hospitals, and six others were transported via ambulance to Jackson County Hospital.

"We estimate there where anywhere from 14 to 15 people in the vehicle," DPS Trooper Ruben San Miguel told Eyewitness News.

Edna police say the rear seat of the Ford Explorer was folded down and the middle seat removed, apparently to create more room in the vehicle.

Two people who fled the crash on foot are now in police custody.

All but one of the seven surviving victims are in stable condition. Most victims have since been turned over to U.S. Border Patrol agents. Authorities say some of the victims have been identified as being from Honduras and Guatemala.

Fatality accidents involving related to human trafficking are not uncommon in southeast Texas. In April 2012, nine people were killed near McAllen when the minivan they were riding in crashed while being pursued by Border Patrol agents. In July of the same year, 14 people died outside Goliad when a pickup truck veered off the road. In many cases, authorities say smugglers are attempting to move large groups of undocumented immigrants between "stash houses" to evade capture.

"(U.S. 59) is a major corridor to get to Houston from the Valley and from the border. It is why it is used for not only human trafficking, but also drug trafficking as well," said Trooper San Miguel.