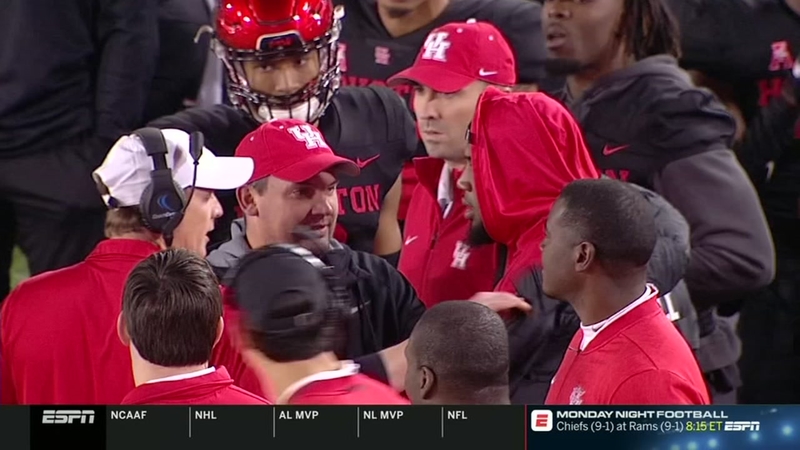 The university released statements each from Oliver and Applewhite, who echoed the moment Thursday night was the result of a passionate Oliver.

"Ed is a passionate human being, and that is why he is the best player in the country. Last night was not indicative of his character and it was a passionate moment within our program. We can, and we will, both learn from this situation as we move forward together," Applewhite's statement read.

"Last night is not who I am," Oliver added in his statement. "I'm very passionate about the game of football and last night there was a misunderstanding. I was caught in an emotional moment. I have the utmost respect for Coach Applewhite and I appreciate the support of Coach Applewhite and my teammates during this time. I love my brothers, my team and my city and I'm looking forward to moving forward with them together. Go Coogs!"

During the broadcast Thursday, the pair were seen in a heated exchange involving Oliver, who was sidelined with injury, wearing a black jacket that only those playing in the game are allowed to wear.

Applewhite told Oliver to remove the jacket and then the defensive tackle got visibly upset.

As the cameras followed the team walking to the locker room at halftime, Oliver and Applewhite were seen arguing.

Oliver had to be restrained by his teammates.

Oliver then shoved those trying to keep him away from his coach. Oliver did not return to the game, and after the victory, Applewhite was asked about dealing with Oliver in the days to come.

"Just talk to him about how to respond to things, respond the way our teammates did tonight, you know. A lot of things happen but they continue to fight and move on and that's the worst thing that happens. We will be alright. We are all young. I don't blame him. I have made plenty of mistakes in my life, and we all need second chances and he will be great and we will all do fine," Applewhite told a reporter.

Houston Cougars beat Tulane but the play everyone is talking about happened on the sideline. A confrontation caught on camera between head coach Major Applewhite and defense of tackle Ed Oliver. pic.twitter.com/MqcRp1QaGw

Applewhite also clarified after the game that the team rule is that only players in the game can wear the sideline jacket, and that he had others take their jackets off.

Oliver is considered one of the best tackles in college football. He already expressed his desire to enter the NFL Draft after his junior year this season. He is a projected top draft pick.