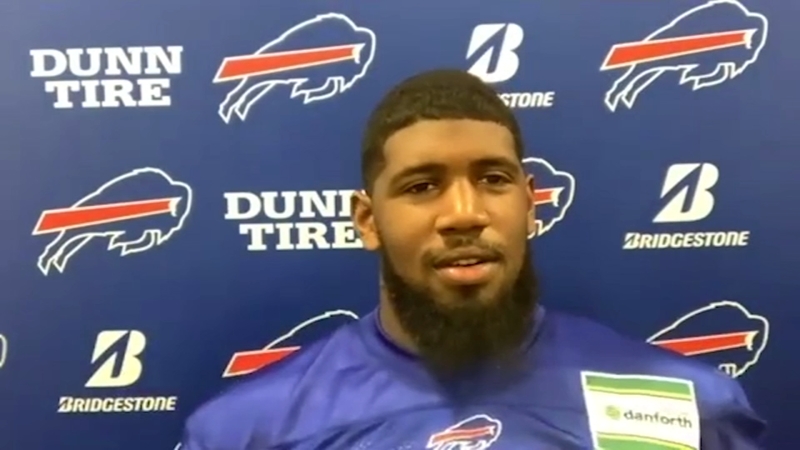 Former University of Houston star Ed Oliver is breaking his silence and talking about his arrest after his DWI charges were dropped.

The athlete was arrested in May in Montgomery County on FM 242 near Patton Village on misdemeanor counts of DWI and unlawfully carrying a weapon after authorities say a pistol was found in his vehicle.

Oliver said he registered a 0.0 breathalyzer and was still arrested on a DWI charge. When his blood results came back, the test showed he had nothing in his system when he was pulled over.

"I'm not sure how you get arrested with nothing in your system," Oliver said during a zoom conference.

Oliver says the arrest was surreal and he felt violated, as he is someone who has stayed out of legal trouble his whole life.

"I don't know if you've ever been to jail but you get stripped down, you get put in this jumpsuit. I didn't feel right," Oliver said. "I didn't work my life and walk the straight line my whole life to be put in a jumpsuit to be taken to jail. That's how I felt violated."

Oliver said George Floyd's killing by police in Minneapolis leaves him thankful he followed officers orders and did not resist arrest.

"It really puts things into perspective, like, that could've been me," Oliver said.

"Mr. Oliver was initially arrested and charged with DWI after law enforcement received a 911 call from a concerned citizen who observed Mr. Oliver around 10 p.m. driving over 100mph, passing other vehicles, and not maintaining his lane of travel. Mr. Oliver was also towing a four-wheeled vehicle and going through a construction zone. After stopping Mr. Oliver, deputies conducted standardized field sobriety testing. Following the conclusion of the testing and based the entirety of the evidence as it existed at the time, deputies determined that probable cause existed for the offense of driving while intoxicated. After a complete review of the investigation and results from blood toxicology which were not available at the time of the arrest, the Montgomery County District Attorney determined that it was appropriate to dismiss the charges against Mr. Oliver.

Throughout the entire traffic stop, the deputies and Mr. Oliver treated each other professionally and with respect. Any questions Mr. Oliver had were answered by the deputies, and the deputies attempted to accommodate any need or concern Mr. Oliver had."
Report a correction or typo
Related topics:
montgomerymontgomery countyarrestnflbuffalo billssportscollege footballdwi
Copyright © 2022 KTRK-TV. All Rights Reserved.
TOP STORIES
Preacher reaches out to suspect who stole from his church twice
Carjacking suspect threw 3-year-old out of truck, mother says
Officer shoots suspect in northeast Houston, HPD says
Fifth Ward residents upset over Union Pacific campaign donations
Expert weighs in on when you can buy a car amid chip shortage
Lina Hidalgo suggests DA could have her 'indicted' as political ploy
Santa Fe librarian still trying to make sense of high school shooting
Show More
Houston janitors fight for an increase in hourly pay
Police have no leads on skeletal remains found nearly 6 months ago
Here's why we're increasing rain chances and rainfall amounts
Houston Dash standout expresses excitement on equal pay decision
18-year-old arrested in shooting death of man with cane, HPD says
More TOP STORIES News