Drugs may have been a factor in man's 15-story downtown Houston crane ascent, HPD says 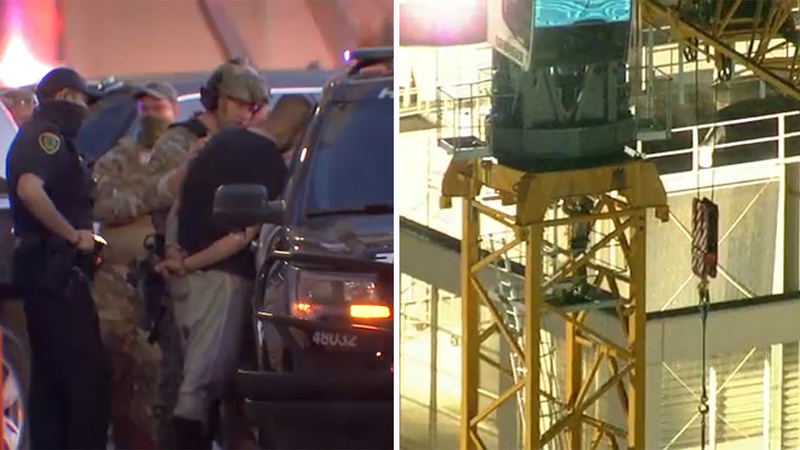 Man taken into custody after climbing 15 stories up crane

Houston police responded to a call of suspicious activity at Crawford and Rusk, across the street from the Marriott Hotel and Discovery Green, around 3:08 a.m.

When officers arrived, they learned a man jumped a construction fence and climbed a crane located at the intersection.

Police say the man climbed approximately 200 to 240 feet high, about 15 stories, and sat in the operator's cabin.

According to Commander Johnson with HPD, officers saw the suspect walking on the catwalk on top of the crane. Once he gained access to the cabin, he was able to operate the controls and the crane moved.

Fortunately, construction workers were able to cut off the energy supply to the crane and the suspect was no longer able to operate it, according to Johnson.

According to HPD, officers tried to make contact with the man. They say he had a radio with him, but did not respond to calls.

WATCH: SWAT officers were able to climb the crane and make contact with the man. They carefully led him back down to the ground.

Video from the scene shows the man moving around in the cabin.

Officers used a drone to get a better look at what was happening.

Just after 6 a.m., SWAT officers that climbed to the top of the crane were able to make contact with the suspect.

It took about 45 minutes, but officers were able to safely make it to back to the ground and take the suspect into custody.

According to police, the suspect complied with SWAT officers when being taken into custody, but he was apprehensive about the descent back to the ground.

Officers strapped him into a safety harness and allowed him to take breaks on the way down.

The man will be charged with trespassing, according to Johnson.

"There are other possible charges pending that pertain to narcotics possession, but at this time, we're still trying to determine the ownership of those narcotics," Johnson said.

It is unclear why the man climbed the crane in the first place.

The METRORail green line was delayed while the scene was active.