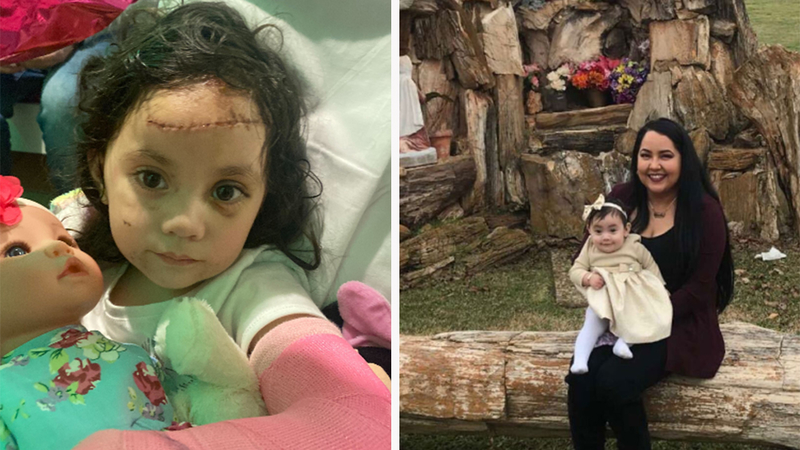 HARRIS COUNTY, Texas (KTRK) -- A 2-year-old girl is left with a large scar on her forehead, a tragic reminder of the DUI crash she survived. Sadly, her mother didn't make it.

The family of 32-year-old Claudia Santillan Obregon laid the mother to rest Monday after the horrible crash on Jan. 8 just before 10 p.m. in the 1700 block of S. Main near Pin Oak.

"A 2-year-old girl has to suffer because of this man who decided to drive drunk," Claudia's cousin, Stephanie Organista said.

There wasn't a day baby Oriana wasn't with her mother.

"They were inseparable," Organista recalled.

The night her mother was driving down S. Main near Pin Oak Drive, little Oriana was strapped in her car seat in back. A drunk driver plowed head first into them and Claudia was killed.

"She had just left us and gone home," her cousin said.

Claudia had just left a rosary memorial for her uncle who recently passed from COVID-19, Organista's father.

ORIGINAL STORY: Mom killed and her 2-year-old daughter critically injured in crash with suspected drunk driver in the Highlands

The crash was so horrific, the vehicles involved are unrecognizable. This is what we saw at the scene.

She and Claudia needed each other through the rough past several months. Claudia had also recently lost her father to COVID-19.

"In our minds, we were going to see her the next day," Organista recalled.

On a night she showed up to honor and remember her own loved one, she was killed.

According to deputies, Vicente Aguilar was behind the wheel, speeding when he collided with Claudia. He also died.

"When I look at her, I just can't imagine that her injuries, they were done because of a man who was intoxicated," Organista said. "It's just so unfair to see her like that."

Claudia's 21-year-old sister will now be left to raise her 2-year-old niece.

"Please, if you're going to drunk drive, just call an Uber. Call your friend. Leave your car there. It's not worth it. You don't know who you are going to impact," Organista warned. "It's just so preventable. You're causing unnecessary deaths. You're killing mothers, sisters, fathers, you're taking away peoples' parents, little babies."

Claudia's family set up a GoFundMe to pay for her funeral expenses and Oriana's medical bills.

All in all, deadly crashes are way up during the pandemic.

The Harris County Sheriff's Office says there has been a 37% increase since 2019.