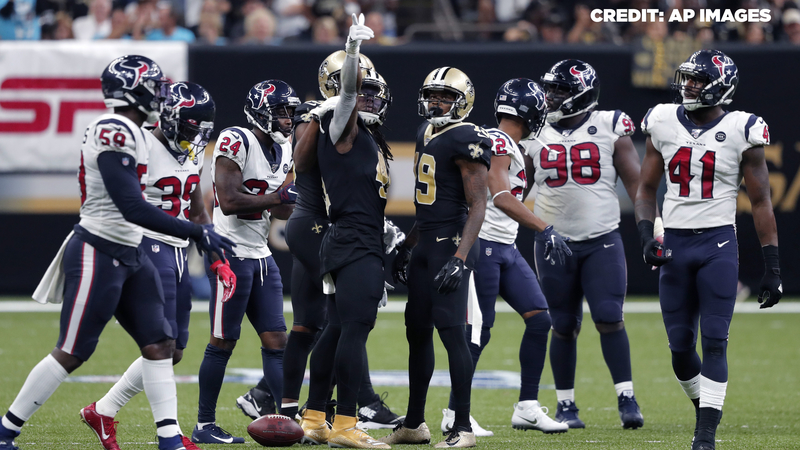 NEW ORLEANS, Louisiana (KTRK) -- In what was one of the best games to kick off the 2019 NFL season, the Texans went into New Orleans and lost at the last second 30-28.

Unforgettable finish. And not in a great way. #Texans

Just like New England last year in the opener. Too much time for a hall of Famer. But Deshaun is special.

Deshaun Watson was sacked on the Texans' opening drive, ending their series.

Credit to the Texans defense for halting what looked like a promising opening drive for the Saints.

It was rough first two drives for the Texans, as Watson was sacked twice in eight minutes.

Whitney Mercilus got his first interception of the season when Drew Brees was looking to make something happen while scrambling. Credit to J.J. Watt for initially causing Drew Brees to scramble with his pressure.

Incredible effort from Mercilus. Have yourself a night #59 #TexansGameday

Will Fuller made an incredible 54-yard reception over Eli Apple as the Texans were deep in their own territory after the Mercilus INT. The drive resulted in a 21-yard TD run from Watson, as the Texans went for it on 4th & 1.

After the Watson TD in the second quarter, he spent some time in the medical tent. He landed hard on his back while trying to stick the landing.

The Saints got on the board early in the second quarter with a 32-yard FG. Credit to the Texans secondary for holding it down and not giving any options for Brees.

It was a long 16-play drive for the Texans, but they capped it off with a two-yard TD connection between Watson and DeAndre Hopkins. With the Texans having multiple long drives in the first half, it was clear it had an effect on the Saints' defense.

The Texans went into halftime leading 14-3. New RB's Carlos Hyde and Duke Johnson split the duties and did well, combining for 10 carries and 63 yards.

It was a quick opening drive for the Saints to start the second half. After Brees connected with Alvin Kamara on a 41-yard pass, Latavius Murray had a 30-yard TD run that got the Saints just within a FG.

The Texans did not let that early TD from the Saints rattle them. A 9-play, 75-yard drive resulted in another TD connection between Watson and Hopkins, this time for 16 yards.

That TD gave the Texans more breathing room with a 21-10 lead.

It's clear the third quarter was all about scoring. Brees and backup QB Taysom Hill connected on a seven-yard TD in the redzone. Kamara continued to find holes in the Texans defense and took advantage of it.

After the interception, a scuffle ensued after Hopkins threw Marcus Williams down, essentially suplexing him. It resulted in a 15-yard penalty.

On the first play of the fourth quarter, Brees and Tre'Quan Smith connected on a 14-yard TD to give the Saints a 24-21 lead.

The Saints defense came alive after that TD to give them the lead, not giving the Texans any room to operate and quickly get to the ball. They were able to get to Watson twice on the following drive.

Much credit to Watson for finding Hopkins on 3rd and 10 from the end zone. The following play, Johnson had a 32-yard run and got the Texans from their own end zone to Saints territory.

The drive ultimately concluded with Watson getting sacked once again with less than four minutes remaining.

It was an unreal moment for the Texans as the game was in the final seconds. Watson and new-Texan Kenny Stills on a TD with 37 seconds remaining to tie the game.

While Ka'Imi Fairbairn initially missed the game-winning XP, a roughing the kicker call gave him another chance, and he redeemed himself.

Ultimately, Will Lutz connected on a 58-yard FG to win the game as the buzzer sounded.

Kamara had his fingerprints all over the Texans defense Monday night. He finished with 97 yards on 13 carries and 72 yards on seven receptions.

Michael Thomas also responded well to his big payday with the Saints, going for 123 yards on 10 receptions.

Hyde had 83 yards on 10 carries, while Johnson had 57 yards on nine carries. Even in a loss, there was optimism with how well the new Texans RB's produced.

Hopkins had eight receptions for 111 yards with two TD's. He and Watson continued their strong chemistry.

Mercilus was the only Texan to get a sack Monday night. He also had that interception in the second quarter. Mercilus was all over the place Monday, in a good way.

Bradley Roby led the way in terms of tackles with eight.