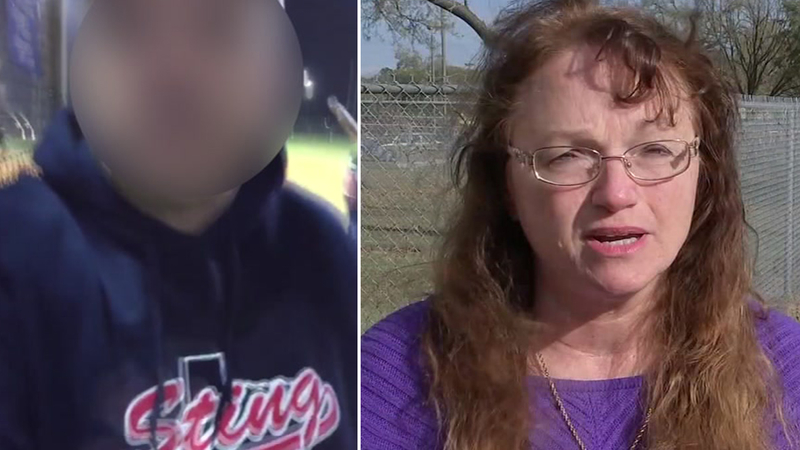 CYPRESS, Texas (KTRK) -- A softball coach with the Cy-Fair Texas Sting organization has been relieved of his duties after a woman claims she caught him on cellphone camera lunging toward her and then knocking her to the ground.

The incident, according to 60-year-old Donna Edwards, happened at the softball fields at Dyess Park on Saturday night.

According to Edwards, she overheard a teenage boy in the stands yelling obscenities and decided to record the incident in order to report it to the softball game organizers, but what happened next, she says, left her injured.

In the cellphone video clip, a teenager can be seen facing the camera a few feet away in the stands and appears to make an obscene gesture. Next, a coach can be seen entering the stands through a gate in the chain link fence with one hand reached out and seconds later it appears the camera falls to the ground.

"What would you do to somebody who did that to your mother?" Edwards told Eyewitness News. "Picture your own mom at a softball game. I have three granddaughters who play on those softball fields."

ABC13 obtained a statement posted by Pat Bergin, who according to the Sting's website, is a coach with the organization. In part, the Sting described the actions by the coach in the video as "unacceptable."

"Cy-Fair Texas Sting strives to promote honesty, integrity, trustworthiness and accountability in coaches, players and parents. We require the highest levels of good sportsmanship at all times," the team said in its statement.

"Hallelujah! That's all I can say because that guy has absolutely no business being around kids," she said.

Edwards claims she is now suffering from neck and back pain as a result of the incident and says she intends on filing charges.

"Hopefully, somebody holds him accountable for his behavior," she said.

Donna Edwards said she pulled out her cellphone and hit record to document the coach's behavior.