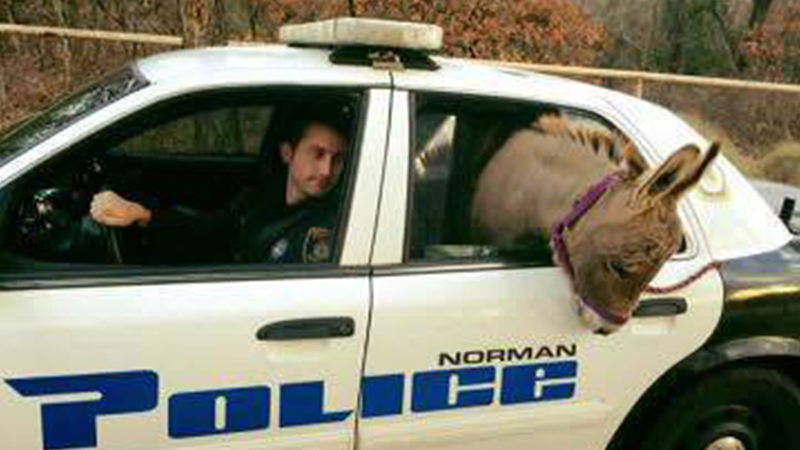 NORMAN, OK (KTRK) -- An Oklahoma police officer came to the rescue of an unusual suspect: A runaway donkey!

Officer Kyle Canaan says he spotted the donkey wandering the highway. The officer didn't want the donkey to get hit, so he lured the animal into the back of his squad car.

"It was a perfect fit," Canaan told KFOR-TV. "I was able to shut both doors. I rolled the window down for it."

Canaan says the donkey, named Squishy, didn't want to get into the patrol car at first. Another woman pulled over and helped, using feed to him into the car.

"I was told today that I actually had the chance to shove somebody else's ass into the back of a patrol car, and there he is," Robin Strader said.

The donkey then thanked the officer in return by leaving him a present in the back seat.

"It used the bathroom in the back of my police car - number two," Canaan told KFOR-TV. "I mean, I must have got it right after breakfast, because there was a lot."

Police are now trying to find the owner of the donkey. If they can't locate them, a family has already offered to adopt Squishy.