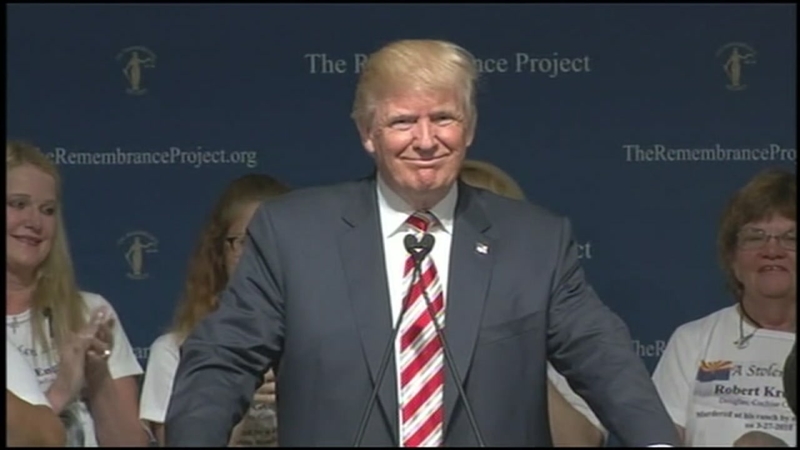 The event at the Omni Westside was only for an invited crowd but those who couldn't go in made their voices heard outside.

Bruce Carter, a Trump supporter said, "Donald Trump, in my honest opinion, is the better candidate for America and for people having a chance to prosper here on the ground." Trump has taken up this issue during his campaign, getting involved with the group "Stolen Lives Families" and pledging to stop undocumented immigration.

Trump's opponents have accused him of being divisive and racist. They protested outside the hotel with signs and chants.

"Donald Trump is the most racist, misogynistic, hateful candidate that has run in a very long time. We're out here to reject his politics," Fabian Sneevliet remarked.

Also at the Omni, a Vice News reporter attempting to cover the rally was arrested.

Thompson's producer, Kathleen Caulderwood, said it was their understanding their status to get in to the event was pending, so they were waiting in the hotel lobby to see if they could get in.

"He's not the type to escalate this situation," said Caulderwood as she waited outside the jail for him to be processed to bond out.

She says a manager at the hotel said they couldn't have a camera, so she left along with her photographer. As they shot protesters outside, she says Thompson called and said he's been arrested and is in handcuffs for trespassing.

"When they asked us to bring the cameras out, we brought them out, when they asked us for credentials we were working on them. This was not a time when we were trying to break the rules," said Caulderwood.

Thompson's attorney, Geoffrey Berg, says his client wasn't hostile or disobeying any commands. "To have a situation like this in the United States of America where a reporter is arrested, by the way for trying to cover a candidate who regularly attacks reporters, is beyond belief," said Berg.