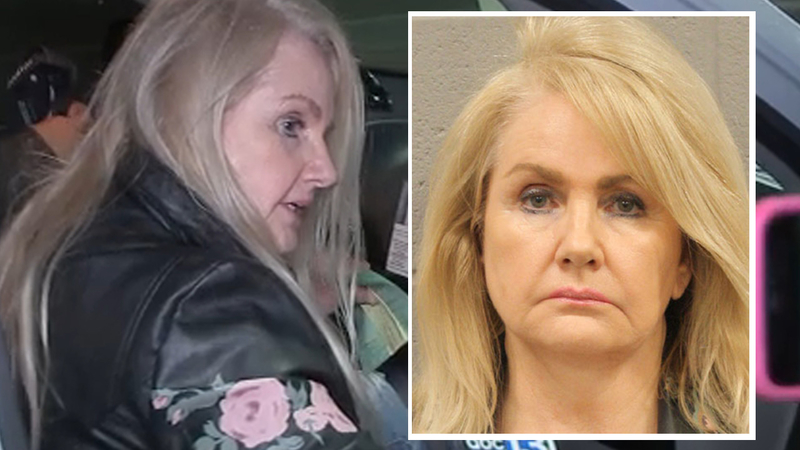 HARRIS COUNTY, Texas (KTRK) -- The woman accused of shooting her estranged husband to death said the entire incident "was an accident."

"It was an accident," she said as she was exiting the jail. When asked if she thinks she should be charged with murder, Carolyn responded, "No. Not at all."

She also said the family of Ray has her love.

Murder suspect Carolyn Court says the shooting was an accident.

The incident happened Sunday afternoon when deputies responded to a home in the 14100 block of Barons Bridge Drive in northwest Harris County.

"I'm in shock," said James McNutt, a long-time customer and friend of Court.

Investigation records revealed that Ray arrived at the home he once shared with Carolyn. Authorities say Ray was at the home to get his belongings and take Carolyn to lunch.

The incident escalated when Ray arrived in his girlfriend's car. According to records, Carolyn said the sight of her estranged husband in that car infuriated her.

"I couldn't believe it," said McNutt, who relied on Ray's business, Gourmet Foods of Houston, to deliver meals and select meats to his businesses. "I knew they were going through a divorce. I thought it wasn't the end of it, they would work a few things out."

Carolyn reportedly told detectives she tried to slap Ray when he entered the home, but he grabbed her wrist to prevent the assault. Records state Carolyn reported she grabbed her Smith and Wesson .38 caliber gun while Ray went to the restroom.
Investigators say she confronted Ray as she held the gun in her hand.

"She admitted cocking the hammer, and pointing the gun at Mr. (Ray) Court and demanding answers to the questions she was asking, at which time the gun was discharged, the defendant admitted to having a bad temper," the prosecutor said.

Carolyn and Ray were co-owners of Gourmet Foods of Houston, per court records. However, friends say it was basically Ray running the entire operation out of a refrigerated truck.

According to friends, Ray moved out of the family home he shared with Carolyn about a year ago, and moved east to Jefferson County. He continued running his business, delivering frozen entrees and steaks to the many customers he's had for 40 years.

"He had called Friday looking for a van, to go get things left in the garage there, I didn't think anything about," said McNutt, who says he had no idea the situation was so dire. "I guess he couldn't find one, I would have let him use my truck."