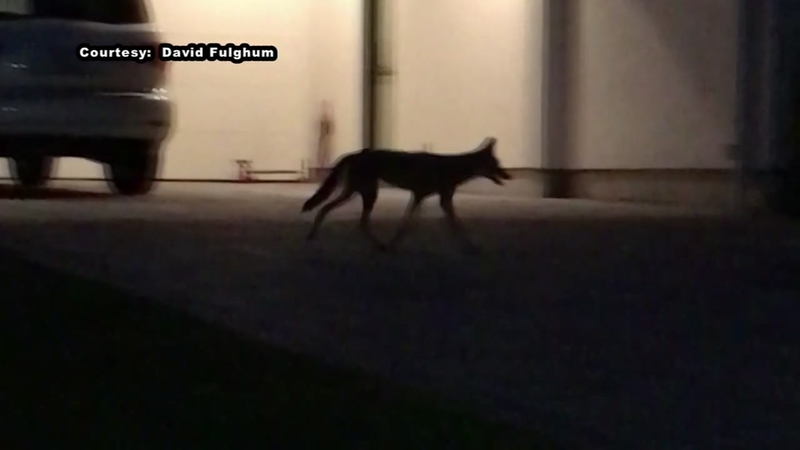 FULSHEAR, Texas (KTRK) -- If you are a pet owner, you may want to check your backyard before letting the dogs out tonight.

Fulshear Police Department's captain is warning others after his two dogs faced off with coyotes.

Captain Mike McCoy told Eyewitness News that his wife let his two dogs Bella and Jaeger outside around 6:45 a.m. Monday.

"Almost immediately, we heard the little one, Bella, yelping and crying out in pain," said McCoy.

Three coyotes scaled the fence of McCoy's backyard, forcing his German shepherd Jaeger to fight back and help Bella.

"He's a very docile dog, but I guess he decided to step up to the plate and take care of business," said McCoy.

This is Bella. Three coyotes attacked her Monday morning in her backyard in Fulshear. Her injuries could have been a lot worse but she was rescued! Who protected her and how you can protect your pets from coyotes tonight on @abc13houston pic.twitter.com/eiXLql1gRs

Jaeger scared off the coyotes and McCoy rushed Bella to an emergency vet.

Bella had to get staples, but doctors say she will make a full recovery.

"Jaeger didn't have any breaks in the skin, just a few contusions. He's going to be alright as well," said McCoy. "He's a hero in my mind."

As the captain of the Fulshear Police Department, McCoy has responded to coyote attacks many times, but seeing his own pet in pain really hit home.

"Make sure you look outside before you let your dogs out to use the restroom next time," warned McCoy. "Take a look. Make sure you're aware of what's going on. Try to prevent it as much as possible. From now on, I'm going to do that."

McCoy says the city of Fulshear is growing at a rapid rate.

However, as new homes, schools, and roads are built, coyote habitats shrink, increasing the odds of running into them.

Texas Wildlife Services says to avoid problems, humans have to co-exist with the animals without letting them get too comfortable.

Don't feed them, keep pet food and water inside, and make sure your garbage is securely stored.

If you see a coyote, you should make a lot of noise to try to scare them out of your yard.