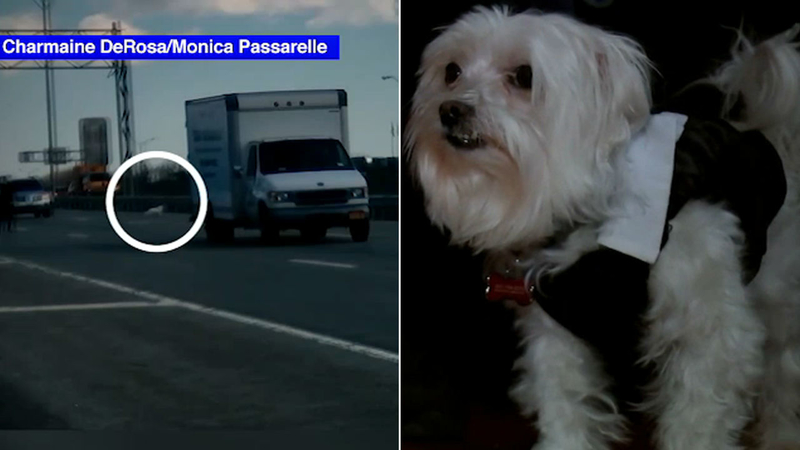 Long Island, NEW YORK -- A dog is lucky to be alive thanks to several good Samaritans and random motorists on the Long Island Expressway who came together to make sure he didn't get hit.

It was Tuesday afternoon when Lucky, a white West Highland terrier, went darting across all lanes of the highway.

The 5-year-old dog first went missing around 9 p.m. Monday when his owner, Brian Lane, let him outside without a leash.

Lane said for some reason, Lucky -- who he had found five years ago abandoned outside a local Wendy's -- took off towards the highway.

Twin sisters Monica Passarelle and Cherie Stevens, both Animal Control officers with the town of Smithtown, were on the Sagtikos Parkway around 1:45 p.m. Tuesday when they spotted the dog.

They were off duty at the time, but they didn't hesitate to jump into action.

"I had to stare at it for a couple minutes, going, is that a plastic bag or a fluffy little dog?" Passarelle said.

Stevens pulled over the car, and Passarelle went running after him.

Eventually, Stevens and two young girls saw Lucky about to venture onto the highway.

"So we all started walking into the LIE, and to our surprise, everybody started stopping," Stevens said.

She said a tractor trailer driver blocked a few lanes of traffic, and a man in a Honda jumped out and started trying to corral the dog.

That's when Lucky ran from the westbound lanes of the highway through the eastbound lanes.

Animal advocate Charmaine DeRosa also pitched in. She had been looking for Lucky after seeing Lane's posts on Facebook.

"I waited kind of on the outskirts on the service road," she said.

Lucky disappeared into the woods and ran two miles straight back to his front door.