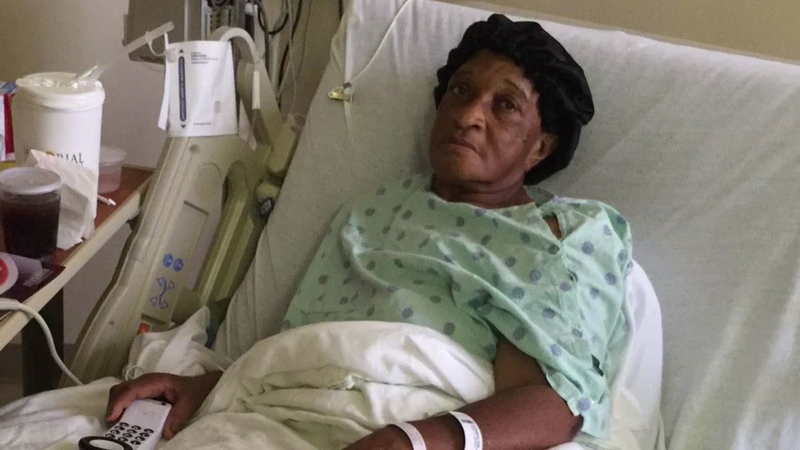 HOUSTON (KTRK) -- An elderly woman is recovering from a dog attack in southeast Houston. The woman says her neighbor's dog attacked her. That neighbor says it must have been another dog from the neighborhood.

Houston BARC is handling the investigation. The top guy there says they are certain that the dog in question is the one that attacked the 70-year-old woman.

Claudette Bluiett says she had just put her dogs inside her front gate when her neighbor's pit bull mix busted through this opening in the fence and took a chunk out of her leg right above her left ankle.

That was August 31. She's been at Memorial Hermann Hospital ever since. She's had three surgeries, including a skin graft on Tuesday.

"From the evidence we have, it is most certainly irresponsible ownership that caused this," says Houston BARC Division Director Jarrad Mears.

Mears says this same dog went after Bluiett in February, but she did not move forward with the process called the "Dangerous Dog Declaration" through the city. That declaration may have made it more expensive for her neighbors to keep the dog.

"They have to get $100,000 liability insurance, keep the dog in a secure enclosure at all times; if the dog is outside the secure enclosure, they must have complete physical control over the animal. Their fence has to be 6 feet at least," Mears says.

That dog has been put down, but City Councilman Dwight Boykins says the story is far from over. In Wednesday's City Council meeting, he asked for stiffer penalties for owners of vicious animals.

"Because currently the fine is up to $100. I want to change that and put some meat on the bone to increase the fine up to $1,000, 10 days in jail, and make that person liable for half if not all the hospital costs to that victim," Boykins says.

The dog's owner tells Eyewitness News and investigators that Bluiett antagonized her dog for years, and that the dog had never been aggressive to anyone.

Councilman Boykins and Mayor Anise Parker will work together moving forward on those stiffer penalties.