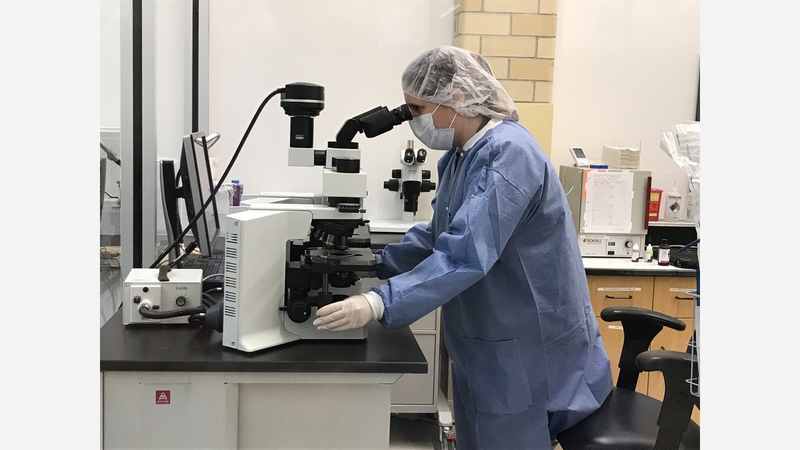 BAYTOWN, Texas (KTRK) -- Scientists are getting better at using technology to identify those who may have committed violent crimes.

The recent arrest, 19 months after the murder of a Baytown woman, is the latest proof of that.

Byron Collins, 29, has been charged with capital murder in the 2016 sex assault and murder of Nataliya Shal.

Authorities say it's the first case in Harris County to be solved through the use of "familial DNA searching."

"This is pretty rare," said Katie Welch, Director of the Forensic Genetics lab at the Harris County Institute of Forensic Sciences.

In the months after Shal was murdered, initial DNA tests failed to lead to a suspect, so investigators tried something new. They took the DNA found at the crime scene and compared it to samples of violent offenders in prison.

"This case is really our first case from our lab that's been submitted for a familial search," said Welch.

She says the data was then sent to a DPS lab in Austin where a computer-based program compared genetic markers between it and known convicts.

"You're looking for them to be similar enough that it would possibly indicate possible biological relationships between the person who left this evidence and someone in your database," Welch said.
In the Baytown case, the sample from the murder scene was genetically similar to that of Travis Collins. He is in prison for aggravated sex assault.

Collins' DNA was put into the system after his conviction.

A FAMILY AFFAIR: Using DNA and a saliva sample, investigators said they were able to find a Baytown woman's alleged killer.

Once police had his name, they were able to zero in on his brother Byron Collins. Police say he has lived on and off since the murder at the very same complex where Shal was killed. Investigators got a sample of his DNA from a cigarette butt and that turned out to be a match to the DNA left at the crime scene.

According to the FBI, only 10 states, including Texas, do this type of familial DNA comparison. It's been successfully used in the UK since 2003, authorities say, helping resolve over 40 serious and violent crimes.