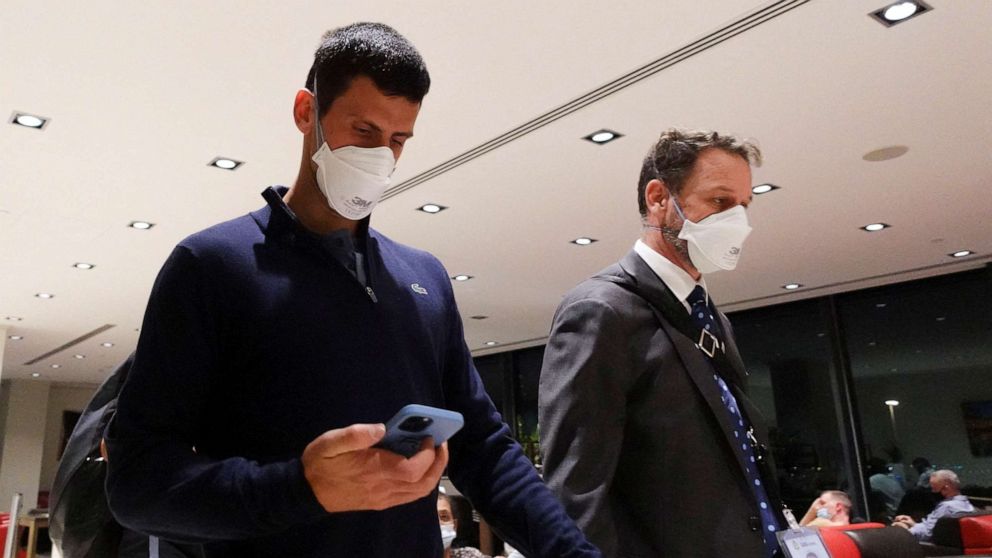 Novak Djokovic left Australia on Sunday after three federal judges upheld the decision to revoke his visa for the second time.

"I can confirm that Mr. Djokovic has now departed Australia," Alex Hawke, immigration minister, said in a statement.

After more than a week in limbo, the Serbian tennis star had been waiting for the court's final say on whether he would be allowed to stay to launch his title-defending bid at the Australian Open on Monday. The judges' unanimous decision arrived Sunday.

"I am extremely disappointed with the Court ruling to dismiss my application for judicial review of the Minister's decision to cancel my visa, which means I cannot stay in Australia and participate in the Australian Open," Djokovic said in a statement. "I respect the Court's ruling and I will cooperate with the relevant authorities in relation to my departure from the country."

"I welcome the decision to keep our borders strong and keep Australians safe," Prime Minister Scott Morrison said in a statement on Sunday. "As I said on Friday, Australians have made many sacrifices during this pandemic, and they rightly expect the result of those sacrifices to be protected."

His family put out a statement Sunday expressing their support for Djokovic and their disagreement with the judges' ruling.

"We are very disappointed with the decision of the Federal Court and the fact that Novak has to leave Australia. This was not just about sports and playing in the first Grand Slam of the season in which Novak has dominated for a decade, but also politics and all the interests that prevailed in this case," Djokovic's family said in a statement to ABC News. "Despite the scandalous behavior towards Novak, we believed that the sport would win. We believed that the fact confirmed by the court would be respected - that Novak has a valid visa, that justice will be served ... We believe that he will come out of this situation stronger, and that time will show what he has indisputably always confirmed so far, and that is that he is a great champion and a man."

Hawke, who canceled the visa, also said he welcomed the decision.

"Australia's strong border protection policies have kept us safe during the pandemic, resulting in one of the lowest death rates, strongest economic recoveries, and highest vaccination rates in the world," he said in a statement.

Djokovic had been scheduled to play on Monday, with his first-round match against fellow Serb Miomir Kecmanovic for the evening session. His position in the draw had been filled, The Australian Open said on Twitter.

Djokovic had appealed to reinstate his visa after it was canceled on Friday.

Both sides made their submissions and replies during Sunday's hearing. The debate focused on Djokovic's views on vaccination and whether those views constituted a public health threat.

The Djokovic legal team argued that Hawke misinterpreted media reports about the tennis star's stance on vaccination. Djokovic's lawyer Nick Wood said there's a lack of evidence to support the claim that Djokovic's presence in Australia could stoke anti-vaccination sentiment.

"Not a single line of evidence in the material before the minister provided any ... foundation whatsoever for the proposition of the mere presence of Mr. Djokovic in Australia ... may somehow, to use the minister's expression, foster anti-vaccination sentiment," said Wood.

The immigration minister's lawyer, Stephen Lloyd, said there is clear evidence of Djokovic's views on vaccination and that by staying in Australia it will encourage opposition to inoculation. Lloyd said Djokovic has become "an icon for anti-vaccination groups."