Power back on in Dickinson after crash that ruptured gas line 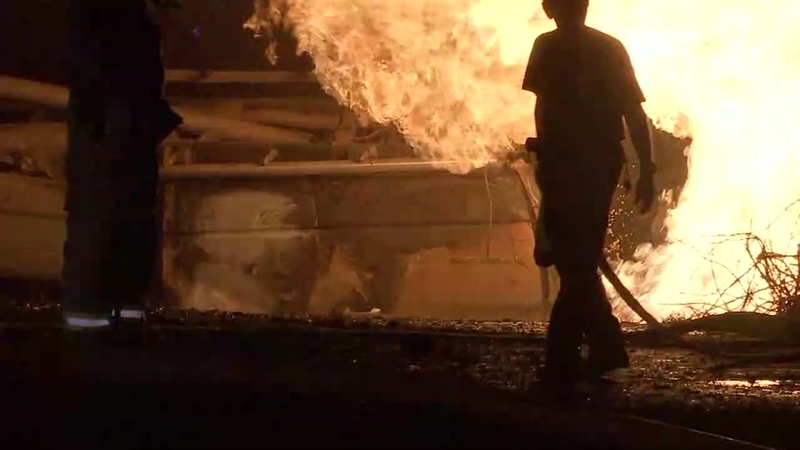 Power back on in Dickinson after crash that ruptured gas line

DICKINSON, Texas (KTRK) -- The fire is out and the power is back on after a crash overnight in Dickinson ruptured a gas line.

The crash happened around 1:30 a.m. on Dickinson Avenue and 32nd Street.

We still do not know what happened to the driver who caused all this, but it is apparent that the accident caused big problems for many people living in the area.

The flames lit up the night sky. It was the only source of light for 1,500 customers of Texas New Mexico Power.

Officers said the driver of a pickup truck lost control of his vehicle, hit the pole and that ruptured an underground gas line.

The power is back on for more than 1500 customers after a ruptured gas line caused by a crash.

"I heard like a big boom and I was like, 'what was that?'" said resident Louie Gonzalez. "And then she bangs on my wall and says, 'Hey, it smells like smoke in here.'"

Volunteer firefighters stayed on the scene for hours keeping the flames from spreading.

CenterPoint Energy crews worked for seven hours to eventually shut off the flow of gas to the ruptured line.

"It's crazy, really crazy. When I seen it, I was hoping that it was not any of my family and it's around Christmas time," said Victoria Gonzales. "It is just the worst time."

Just after dawn, the fire was controlled enough for crews to work on the power line. Meanwhile, the gas company was busy shutting down the pipeline.

For the people living in the trailer park affected by the outage, it meant a long night without electricity and an uncertain start to the day.

"It's aggravating and frustrating," said Brayden Abrego, who lives near the accident scene. "My phone died, so I can't charge my phone."

Police said the driver left the accident scene and has not been found since. They did check the address on the registration, but no one at that home knew anything about the truck or the crash.

Traffic accident leads to a fire and power outage in Dickinson.