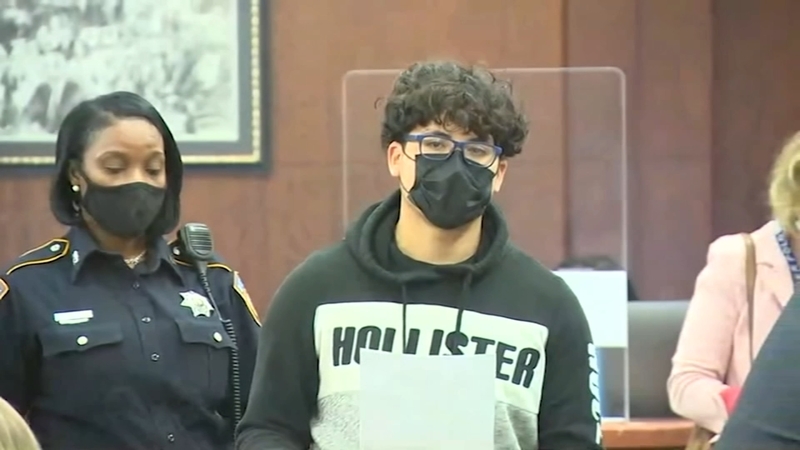 Bond reinstated for teen accused of shooting his girlfriend 22 times

HARRIS COUNTY, Texas (KTRK) -- A teen accused of shooting his girlfriend, Diamond Alvarez, 22 times is back out on bond. This comes just days after he was taken into custody for allegedly violating bond requirements.

Frank Deleon Jr., 17, was taken into custody earlier this week after allegations that he failed to comply with curfew requirements.

But in an update on Wednesday, records showed his bond was reinstated and he was released. It's believed there was a glitch in Deleon's GPS monitor and he did not leave his home, according to the Harris County District Attorney's Office.

"We are not happy with this decision and with the people who made this possible. Frank (Deleon) has proven to be a danger to the Alvarez Family. We had petitioned for him to remain in custody so that the family could be in peace. Diamond did not get a second chance, why should he? We need answers," said FIEL's executive director, Cesar Espinosa, said on Tuesday.

Houston investigators believe the 15-year-old victim was gunned down in her neighborhood park on Jan. 11 by her boyfriend, Deleon, after she found out he was cheating, according to court documents.

RELATED: 15-year-old girl shot and killed as she walked dog in SW Houston
Deleon posted his $250,000 bond on Jan. 19 after being charged with Alvarez's murder, according to court records.

RELATED: 'Why is he free?': Family of Diamond Alvarez demands murder suspect be returned to jail

RELATED: 'Justice for Diamond': Family and community call for 17-year-old murder suspect's bond to be revoked