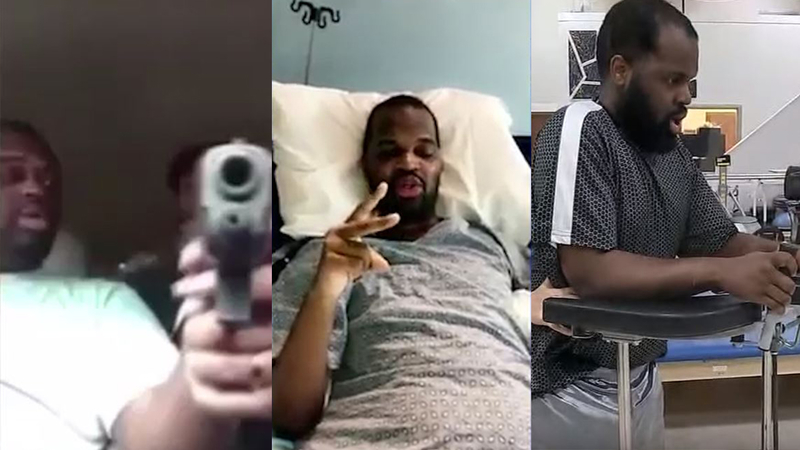 TIMELINE: Devyn Holmes' recovery since being shot on FB Live

HOUSTON, Texas (KTRK) -- It was a jarring scene played out to the horror of people who watched on Facebook Live - a man shot in the head.

Since the Easter Sunday shooting in 2018, the victim, Devyn Holmes, has been making big leaps in his recovery after the horrific digital display.

April 1, 2018: Devyn Holmes is shot in the head while a cell phone broadcasts his interactions with a woman and another man inside a vehicle outside a Valero gas station on Almeda and Southmore in southwest Houston.

Holmes is sent to Ben Taub Hospital in critical condition.

In the moments before the shooting, which was initially described as accidental, Holmes is heard on the Facebook Live video saying, "You're making me nervous."

April 3: As Damper makes her first appearance in court, Holmes' family said their wounded loved one remains on life support, with his recovery up in the air.

April 4: Holmes is upgraded to stable condition just three days after taking a bullet to the head.

Meanwhile, Chas Martin, a Houston firefighter, described jumping in to save Holmes in the moments after the shot went off.

April 5: As Holmes continued to fight for his life, a childhood friend and NFL star, Mike Evans, talked with Eyewitness News about his old friend's ability to get through adversity.

"We saw on video that he was shot in the head and he survived that. He's a true warrior," Evans said.

April 11: A week and a half after the shooting, Holmes' family says the man's condition continues to improve, and in a big step, Devyn opens his eyes.

"The family strongly believes that the prayers and support they have received from all over the nation and the world are fueling Devyn's remarkable recovery," family attorney Shanna Hennigan said in a statement.

Hennigan adds, however, that doctors have kept him sedated "so that his brain can continue to heal."

Through it all, Holmes' mother has not left his side, according to the family attorney.

RELATED: Family of man shot on Facebook Live says he opened his eyes and improving

The family of Devyn Holmes says doctors are keeping him sedated to allow his brain to heal after being shot in the head on Easter Sunday.

April 22: In the biggest stride in his recovery, Holmes is completely breathing on his own, according to his mother.

Sheree Holmes confirmed that the respirator was removed. She calls the progress amazing, but is also remaining reserved.

April 30:
Holmes's family reported that he whispered the word 'alright' in response to someone telling him something.

August 13: More than four months after being shot in the head during a Facebook Live broadcast, Holmes was sitting up and speaking.

In a video shared by his family, Holmes was seen for the first time saying, "Team 3Stakks, I'd like to thank y'all for your prayers and support."

READ MORE: Devyn Holmes now sitting up and speaking more than 4 months after his shooting on Facebook Live

August 28: Holmes' family shared a video showing him standing and exercising in the hospital for the first time since sustaining the traumatic injury.

September 29: People cheered for Holmes on stage at a gathering in Galveston County on his first day out of the hospital. The crowd erupted in applause when he appeared in his wheelchair.

January 14, 2019: In an exclusive interview with ABC13, Devyn spoke out for the first time since the tragedy.

May 4: Community members and supporters joined Holmes to celebrate his 28th birthday. Surrounded by friends and family at the Texas City Park pavilion, Holmes said he has no memory of the shooting or the first few weeks he spent in the hospital.

May 30: Holmes graduated from therapy a year after he was shot on Facebook Live.

August 23: New video showed Holmes standing up on his own.

READ MORE: Devyn Holmes graduates from therapy a year after he was shot on Facebook Live