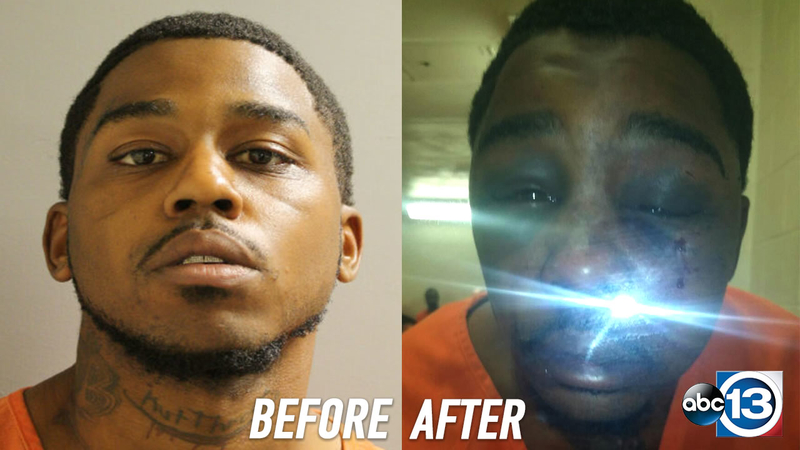 HARRIS COUNTY (KTRK) -- Three Harris County Jail detention officers have been suspended due to allegations of excessive force on an inmate.

Harris County Sheriff Ron Hickman announced the decision at a press conference in which he outlined an incident Monday at the jail.

The sheriff said the inmate, Jerome Bartee, asked for medical attention at the 1200 Baker Street Jail and the incident happened during the transport to the facility. Approximately six staff members responded to the incident and attempted to force the inmate into submission, according to the sheriff.

Bartee's family provided a picture, which showed the injuries to his face. You can see a swollen eye, cuts and they also say his nose was fractured. He was released Wednesday night on his own recognizance. His family took him to Ben Taub Hospital.

"Detention officers are seen on video striking the inmate in an attempt to subdue him after he was restrained," Hickman said. "A supervisor arrived on-location and de-escalated that confrontation."

The sheriff said it started with one officer and then more joined in.

Hickman said high-definition video exists of the confrontation, but there's no word yet on whether that video will be released.

Exclusive picture of inmate after he was allegedly assaulted by detention officers in HCSO jail @abc13houston pic.twitter.com/Li6pzL3eQz

"The video depicts what we would see as unnecessary application of force. Obviously there's a group of people, there's a point where you can see there's enough, they've restrained the individual. When you go beyond that, that's not what we're here for," said Hickman.

Bartee was sent to Ben Taub Hospital for treatment of "multiple lacerations" to his face and then was released back to the jail.

Hickman said three others were involved in the incident and they are investigating them at this point. One or all of those employees could face suspension without pay.

The three other detention officers that were suspended, are suspended with pay. Hickman did not disclose their length of service with the department.