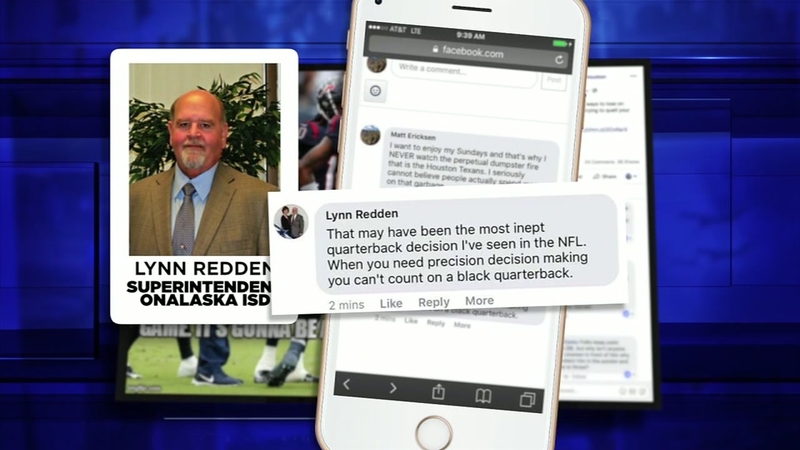 ONALASKA, Texas (KTRK) -- The superintendent of a small town school district north of Lake Livingston is in hot water after his social media post questioned the ability of Texans' quarterback Deshaun Watson because he is black.

Lynn Redden, the superintendent of the Onalaska Independent School District, posted on the Houston Chronicle's Facebook page, "You can't count on a black quarterback."

The incident began on Monday, when the Chronicle posted a meme on its Facebook page, referencing the final seconds of the Texans' loss to Tennessee, in which Watson held onto the ball.

Reaction from parents in Onalaska was swift.

"I think he needs to be checked out for that," said dad Waylon Johnson. "That needs to be addressed. "Sounds (racist) to me.

"I don't think he needs to be in that position he's in," said Jeremy Watts, another parent and firefighter. "That's why we have to deal with stuff all the time because people make comments like that. It's horrible, it's disgusting."

The Onalaska ISD posted a response on their Facebook page:

"Onalaska ISD regrets that an inappropriate comment has been attributed to the District's Superintendent. The OISD does not condone negative comments or actions against any race. The District values every individual and therefore the District will take the appropriate measures to address the situation expeditiously and completely."

A special school board meeting has been scheduled for Saturday morning. On the board agenda is "Personnel discussion with possible action regarding Superintendent and Superintendents Contract."

ABC13 has reached out to Redden for comment. He did not show up at the district office on Tuesday and would not answer the phone.

We also tried to contact several board members, but nobody responded.

Redden told the Houston Chronicle, "I totally regret it."

The Texans were off Tuesday, and players were not available for comment.

As for Matt Erickson, the man who pointed out Redden's comments, he says the focus should be on the superintendent.

"I think the parents of those children, deserve to know what this guy is saying and he's thinking. I don't care if he deleted the comment, he made the comment," said Erickson.