Deputy accused of murdering wife not allowed to attend her funeral 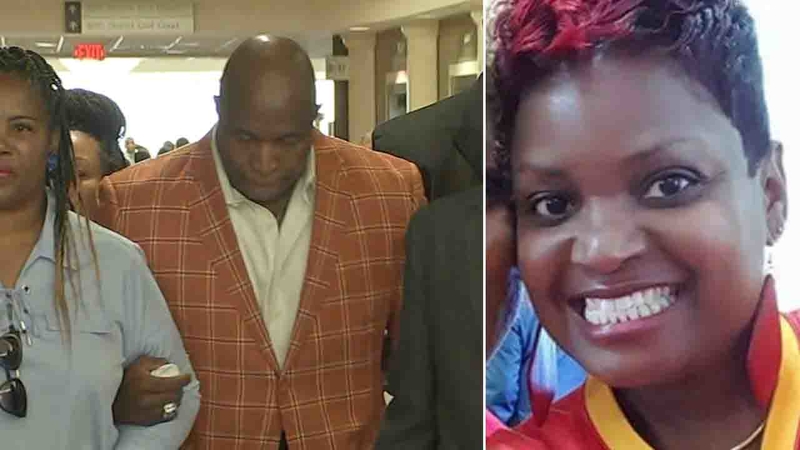 HOUSTON, Texas (KTRK) -- Harris County Deputy Renard Spivey walked into court limping, surrounded by at least a dozen friends and family members. It's been barely 48 hours since he got out of the hospital, was arrested and bonded out of jail.

Spivey, 63, is charged with murdering his wife, Patricia, on Sunday. She was found in a closet in their house on Briscoe Street. The 52-year-old mother had been shot twice.

Spivey says it was an accident and happened during a struggle over a gun. According to court paperwork, he called 911 and told a dispatcher "shots fired." When officers arrived, Spivey had been shot in the leg.

Friday morning, a judge ruled Spivey or his family cannot have any contact with Patricia's family, specifically warning him not to speak to her brother, Ezra Washington.

Washington told police that the couple had been arguing about their lack of intimacy, and Patricia's suspicions that Spivey was "possibly back on steroids and/or having an affair," according to court paperwork. He added that he talked with Renard Spivey three times in the hours before the shooting. Spivey reportedly told Washington things like, "she's counting my pills (low testosterone medication), claiming that I'm sleeping with someone else."

"I never thought that he'd go that far," Washington told ABC13. "I should have acted on it and that's going to eat me up for a long time, forever. But him saying that and then acting on it, I gave him the benefit of the doubt."

"If your wife died and you're trying to plan a funeral and you're not mad at her or her family but they're mad at you, in the long run if you didn't go to the funeral, your own wife's funeral, it's awful," said Mike DeGeurin, Spivey's attorney. "Of course he wanted to participate in the funeral but he's going to follow the judge's order and not do so."

The judge also set a curfew, ordered Spivey wear an ankle monitor and told him to turn over his passport.

DeGeurin pointed out Spivey travels to California from time to time for work. He's an actor who most recently played a bailiff on a courthouse TV show. The judge said the court will make some travel exceptions to his bond conditions when necessary.

Patricia's family declined to talk, though her daughter was in the courtroom.