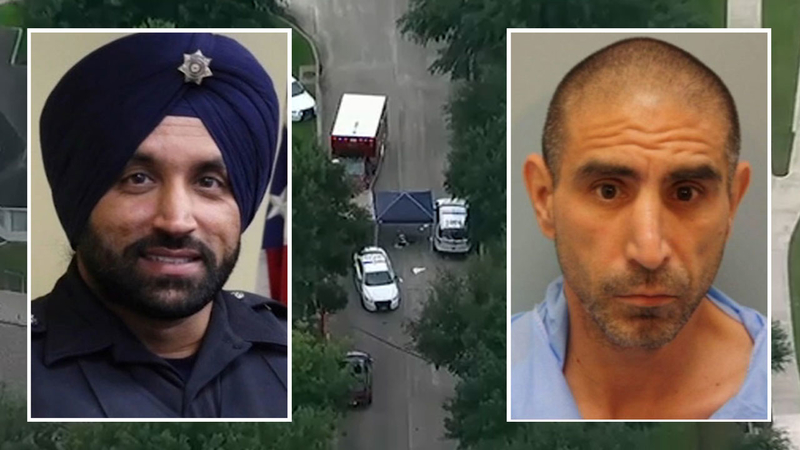 HOUSTON, Texas (KTRK) -- Minutes before he was shot and killed, Harris County Sheriff's Deputy Sandeep Dhaliwal apparently told accused killer Robert Solis he knew Solis had given him a false name during a traffic stop. It's a detail from an exclusive interview Larry Covey gave 13 Investigates Tuesday afternoon.

Covey also says Solis called him minutes after the alleged murder looking to get away from the scene.

Covey says he is dating the woman who was in the car with Solis when Deputy Dhaliwal pulled them over in northwest Harris County on Sept. 27.

He met with ABC13 to make sure his neighbors and city know, "I didn't have anything to do with it. Everybody thinks I'm involved and I'm not."

The last time we saw Covey, Harris County Sheriff's deputies were detaining him near the scene of Dhaliwal's cold-blooded murder. He was later released by investigators.

Deputies at the time didn't know Covey's connection, which he laid out for us: Solis is a volunteer caretaker for the girlfriend's father.

After Deputy Dhaliwal pulled Solis over, Covey says Solis gave the deputy a fake name and Dhaliwal figured it out.

"(Deputy Dhaliwal) came back and said, 'There's nobody by that name, that name is not real... This is not you.'" Covey said his girlfriend asked Solis, "'Why are you lying?' And he said, 'I have a blue warrant.'" A blue warrant indicates Solis was wanted for parole violations.

Minutes later, Covey picked his girlfriend up from the traffic stop and drove to work, leaving Solis alone with Dhaliwal on the side of the street.

Covey says Solis then called him, apparently looking to get away from the scene.

Deputies were able to track Covey and his girlfriend down quickly. Covey drove back to the scene, where deputies detained them for questioning. "They just came running out and with guns and I got out of the car."

Covey answered investigators questions. He is not charged and is not a suspect. He said repeatedly he is willing to come to court and testify.

Solis is, of course, only charged with capital murder. Solis has not yet entered a plea. Calls to his attorney late Tuesday afternoon were not returned.