Waller Co. deputy killed in rollover crash had only been on the job a few days 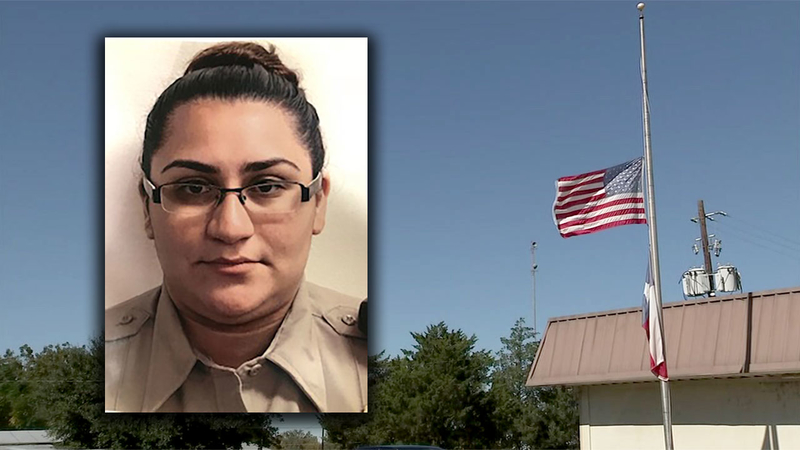 A Waller County Sheriff's deputy killed in a crash Wednesday night during the storms has been identified as 23-year-old Deputy Loren Vasquez.

WALLER CO DEPUTY killed during the storm last night was Loren Vasquez. From the sheriff: “Her patrol unit landed upside down in a water filled ditch. Responding deputies were unable to gain access to Deputy Vasquez inside of her vehicle.” #abc13 https://t.co/ENtLMrGav0 pic.twitter.com/kHzFYBr9t2

The crash happened around 9:30 p.m. on FM 362 northbound near Hoover Road, southwest of Hockley.

Authorities say Deputy Vasquez was on her way to a high-priority water rescue, when her patrol car went airborne after driving into water on the road.

Her vehicle landed upside down in a water-filled ditch.

It's not clear how deep the water was, but it was deep enough that other deputies and officers struggled to pull her out of the water.

A Waller County deputy had only been on the job officially for a few days when she was killed.

Vasquez was heard over the radio saying, "543 en route," before the incident.

Conversations heard over the law enforcement radios also show that it was difficult to rescue the deputy, but another deputy eventually reached her.

Deputies saluted Vasquez as she was loaded into an ambulance.

She was taken to Memorial Hermann Hospital - Cypress, where she died. A procession of law enforcement vehicles escorted the body from the hospital into Houston to the medical examiner's office, who will determine an exact cause of death.

POWERFUL sign of love & respect: #Waller Co. deputies salute their fallen colleague as her body is loaded into an ambulance, on its way to the medical examiner's office. She died overnight in her patrol car after getting trapped in high water. #abc13 https://t.co/e2gm4Slzlq pic.twitter.com/dbgkSorOTz

Waller County Sheriff R. Glenn Smith posted a message on Facebook saying in part, "Words will never express what our office is going thru and we can only ask for your prayers."

Waking up to tough news this morning. A deputy with the #WallerCo Sheriff's Office died in floodwater overnight. Her name, age has not been released. Sheriff posted this on FB overnight. #abc13 https://t.co/7ki3HLEw5A pic.twitter.com/K8dCZyaeuP

We’re sorry to hear of the loss of a Waller County Deputy Sheriff overnight. We’ll do anything we can to help our WCSO neighbors during this difficult time. pic.twitter.com/FVIy6pEs9h

Later in the morning, a woman left flowers by the flagpole outside the sheriff's office where the flags have been lowered to half-staff. Inside, a chaplain with the Houston Police Department visited with deputies.

Flag at the #Waller Co Sheriff’s Office lowered to half staff. Deputy died in the storm overnight. She was trapped in her patrol car as floodwater rose. #abc13 https://t.co/ENtLMrGav0 pic.twitter.com/2fMNWm3D4L

Deputy Vasquez lived with her parents and younger brother in Waller County. She graduated from Royal High School.

She had also been an active member of the Brookshire Volunteer Fire Department for the past seven months.

The Brookshire Volunteer Fire Chief says his department is struggling with her death. He adds that Vasquez's cousin is also a volunteer firefighter with the department.

Deputy Vasquez joined the sheriff's office back in May and had just completed her 20-week Field Training Program.

"She was right out of the academy and excited to be employed with us, especially in the county where she lives," said Deputy Byron Fausset.

"She was one of us. Public safety was her mission in life," said Capt. Manuel Zamora.

She had been on patrol for only three nights when she died in the accident.

"I can tell you I interviewed her myself when she first applied, and she told me she wanted to service the citizens of Waller County proudly," recalled Chief Deputy Craig Davis. "And as cliché as they may sound to some folks, I could see in her eyes and face that she meant every word of it."

A vigil is being planned at the fire department Thursday at 7 p.m. Details of funeral arrangements have not yet been announced.