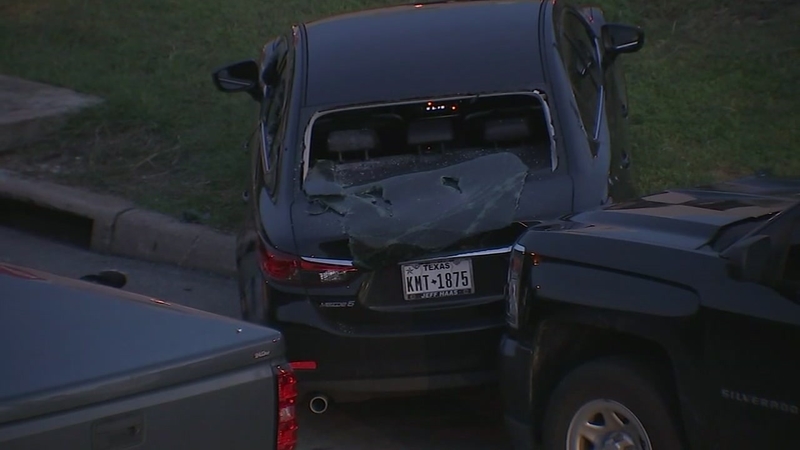 HOUSTON, Texas (KTRK) -- An aggravated robbery suspect was shot and killed by law enforcement when he rammed unmarked Harris County Sheriff's Office vehicles, according to investigators.

It happened just before 6 p.m. Wednesday at Gellhorn and the East Freeway.

Undercover deputies with a sheriff's office task force spotted the vehicle Wednesday morning and started following it, along with DPS troopers.

The black Mazda was taken in an aggravated robbery in Humble sometime earlier, investigators said.

The officers finally decided to stop the car by using unmarked vehicles to pin it in.

Deputies kill suspect accused of trying to run over officer.

Officials said a DPS trooper walked to the driver's door of the car, trying to get the suspect out when the suspect put the car in reverse ramming officers' vehicles.

"He began to violently back up and as a result of him violently backing up and almost hitting officers, they discharged their weapons," Houston Police assistant chief Sheryl Victorian said.

At least two troopers and a deputy fired at the suspect. Deputies and troopers performed CPR, but he was pronounced dead.

Amazingly, a woman in the vehicle with him was not hurt.

"She is now a witness. We don't believe she was involved in the aggravated carjacking," Victorian said.

No law enforcement officers or bystanders were hurt. Officials couldn't say whether the suspect was armed.

"We haven't conducted a complete search of the vehicle at this time. He was using the vehicle as a weapon to strike other vehicles at the time of the incident," regional director of DPS Jason Taylor said.

Sheriff Ed Gonzalez said the suspect, whose name hasn't been released, is thought to be connected to at least two other robberies and may be linked to more.

Deputies and @TxDPS have fired at vehicle theft suspects at Gellhorn and East Freeway after the suspects attempted to run over one of the DPS Troopers. One suspect has been confirmed deceased. No law officers hurt. PIO en route. #hounews pic.twitter.com/mR8N1AHDiq