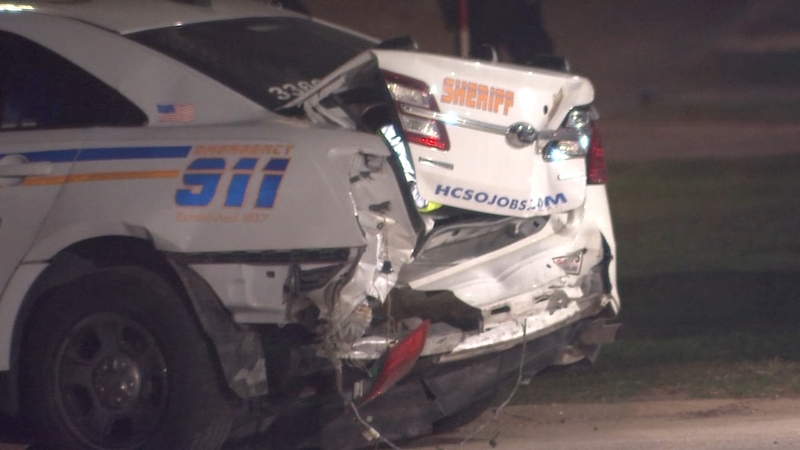 Deputy among the injured in law enforcement vehicle crashes

HOUSTON, Texas (KTRK) -- Three separate overnight crashes involving law enforcement vehicles include a Harris County sheriff's deputy who was injured in what's believed to be a collision with an intoxicated driver, police said.

The deputy was attempting to stop a U-haul truck on the East Freeway near Beltway 8 around midnight when he was rear-ended.

The deputy was running emergency lights and the siren when the crash happened, according to the Harris County Sheriff's Office. The car that crashed into the cruiser ended up hitting the U-haul on the shoulder of the freeway.

The deputy and a passenger in the other car involved were taken to hospitals with non-life threatening injuries. Investigators said they believe the driver who caused the crash was intoxicated.

In a separate incident in southwest Houston, Houston police officers were involved in a crash involving a driver who ran a red light. It happened at Fondren and West Airport.

The officers crashed into a truck that had turned in front of them, police said. Inside the truck, a child under 10-years-old was not wearing a seatbelt, police said. No major injuries were reported in that crash.

Another crash involving Houston police happened around 2 a.m. Saturday in the southeast part of the city when a suspected drunk driver pulled out in front of an officer on Edgebrook at Theta. The officer suffered minor injuries in that crash and is expected to fully recover, police said. The driver of the vehicle involved was taken into custody.

The crashes are the latest in a growing number of incidents involving law enforcement vehicles in the Houston area.

A Harris County Precinct 7 deputy constable was injured in a crash during a pursuit of a stolen vehicle on March 18.

A Houston police officer was injured last month in a crash involving a driver who ran a stop sign.