Man says he shot deputy constable because 'voices in his head told him to': Prosecutors 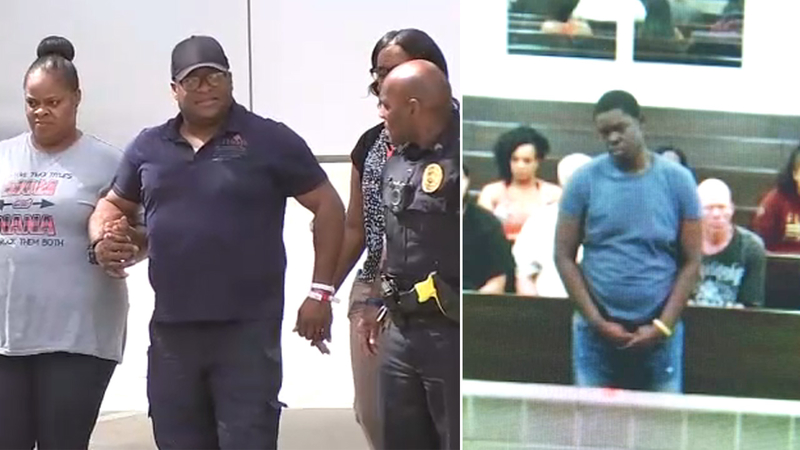 HOUSTON, Texas (KTRK) -- The man accused of shooting a Harris County Precinct 7 deputy constable during a traffic stop said he did it because "the voices in his head told him to," prosecutors say.

Romando Lorenzo Powell, 24, is charged with attempted capital murder of a peace officer. He made his first court appearance overnight.

"In a recorded interview, after waiving his warnings, stated he shot the deputy intentionally because 'the voices in his head told him to,'" prosecutors said as the charges against Powell were read.

The shooting happened around 12:30 a.m. Wednesday when Deputy Constable Quinton Goodwill stopped a car with Florida license plates in the 13700 block of Fondren near the Sam Houston Tollway in southwest Houston.

When Goodwill walked up to the car, Powell, who was inside, immediately fired shots at him, police say.

According to investigators, Goodwill pulled Powell over for reversing the wrong way on Fondren.

Audio from police dispatch captured the shooting as it unfolded.

"We have a deputy shot South Sam and Fondren at Metro Park and Ride. Looking for silver Honda Accord with Florida license plate," the dispatcher said.

Goodwill was hit twice in the upper chest and in the flashlight he was holding.

"We checked out his whole body and looks like one round hit him in the chest, but the vest caught it. Did not penetrate through the skin," the dispatch audio continued.

Goodwill ran for cover during the shooting and was helped by a man who was passing by on a bicycle. He was released from Memorial Hermann Hospital later that morning.

Goodwill was wearing a bulletproof vest at the time of the shooting, and deputies say that saved his life.

Powell's attorney said in court that the 24-year-old moved to Houston from Florida two weeks ago.

Powell also lives with a church member and has worked as an armed guard at a children's hospital, his lawyer explained.

After the shooting, Powell drove off but was later found several miles away at Orem and S. Post Oak.

Officials say he made it easy to catch him because he did not have on his headlights, and a weapon was in plain sight. Officers say they recovered a high-capacity magazine, a bulletproof vest and a large amount of rounds of ammunition.

Goodwill is a 5-year veteran of the Harris County Toll Road Authority under precinct 7.