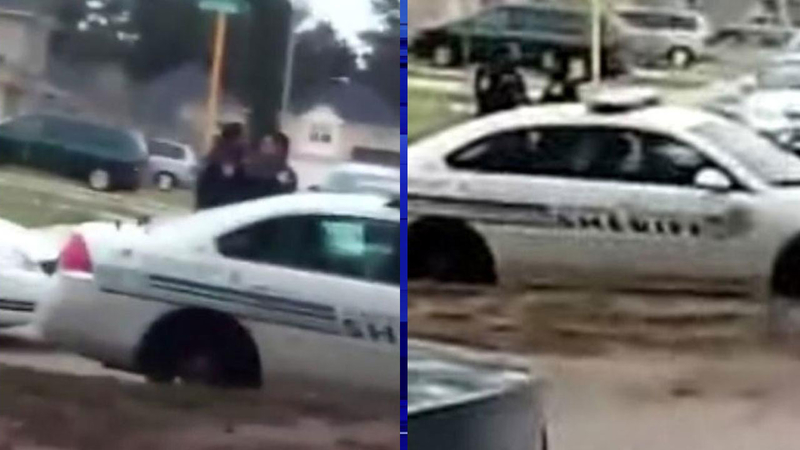 HOUSTON (KTRK) -- This is not something you see every day: Two men in uniform in a confrontation with one another.

We obtained two vantage points of the encounter, in which one repeatedly shoves the other. And in one of the videos, the smaller of the two makes references to the other's wife, finances, and -- according to witnesses -- his ethnicity using a pejorative term.

"At first they're were in each others face and real close," explained one of the women who shot the videos. She asked we not identify her. "We tried to figure out if they were going to fight. That's why you hear people in the background asking if they're were fighting. Then they started shoving and you knew it was serious."

Sensing what she thought might become a fight, she pressed record.

"You don't see police officers fighting every day," she said. "What I've seen them do, it didn't look like it was good at all. There was shoving. It didn't just get verbal. It got physical. What if it went farther than that, who was going to break it up?"

Residents of the Greenspoint area who took the videos tell us they recognized both from regular patrols.

For its part, representatives from the Harris County Sheriff's Office met with us Tuesday night and viewed the video. They then sent us this statement:

"The Harris County Sheriff's Office is in receipt of viewer video from KTRK ABC-13. A grievance has been filed by two employees following the brief exchange. The matter will be addressed in accordance with HCSO policy."

We asked for a clarification about the grievance. A spokesman told us one employee filed a grievance against the other. They've not released any further information about their length of service or rank.
Related topics:
houstonfightharris county sheriffs officecaught on camera
Copyright © 2022 KTRK-TV. All Rights Reserved.
TOP STORIES
Man died after going back inside burning house in N. Houston
Employee fatally shot at Cracker Barrel leaves family proud
Man shot by possible family member in north Harris Co., sheriff says
Robbery victim's dad blames lack of parenting for young suspects
HISD to stay closed through Tuesday due to rise in COVID cases
Baby found inside apartment after deadly double shooting in N. Houston
Conroe man accused of scamming $600K from elderly victims
Show More
What happened to water levels on Clear Lake this weekend?
Big warm-up before a midweek cold front
Here's what you need to know to vote on March 1
Kilometer-wide asteroid will make its closest pass by Earth this week
Humboldt penguins coming to Houston in early 2023
More TOP STORIES News