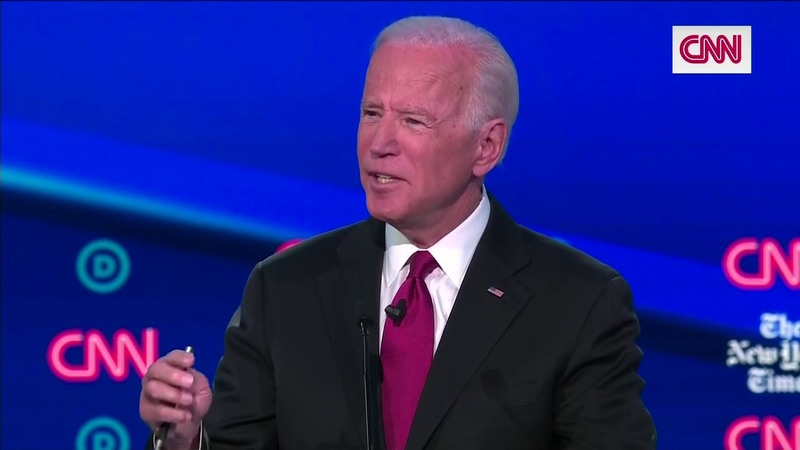 Joe Biden defends himself, son on Ukraine during Democratic debate

WESTERVILLE, Ohio -- Joe Biden defended both his actions and those of his son in dealing with Ukraine during Tuesday night's Democratic debate on CNN in Westerville, Ohio.

Moderator Anderson Cooper asked Biden a question about why he has pledged that no members of his family would engage in foreign deals if he were to be elected president while insisting his son's dealings with foreign countries were above board during Biden's vice presidency.

"President Trump has falsely accused your son of doing something wrong while serving on a company board in Ukraine. I want to point out there is no evidence of wrongdoing by either one of you," Cooper said.

He then asked Biden about why it was okay for his family or associations to have served on foreign boards while he served as vice president.

"I carried out the policy of the U.S. government routing out corruption in Ukraine, and that's what we should be focusing on," Biden said.

Biden said he was "proud of the judgement" his son made, and "proud of what he had to say," and emphasized they had always kept their professional and personal lives separate to avoid conflicts of interest.

"I did my job, I never discussed a single thing with my son having to do with Ukraine, no one has indicated I had," he added later. "We've always kept everything separate, even when my son was the attorney general of the state of Delaware, we never discussed it so there would be no potential conflict."

President Donald Trump is facing an impeachment inquiry over his effort to have Ukraine investigate Biden.

Biden urged that the focus go back on Trump, saying, "Rudy Giuliani, the president and his thugs have already proven the fact that they are flat lying."

"He's going after me because he knows that if I get the nomination I will beat him like a drum," Biden said.